The Banner Boy Scouts Snowbound A Tour on Skates and Iceboats 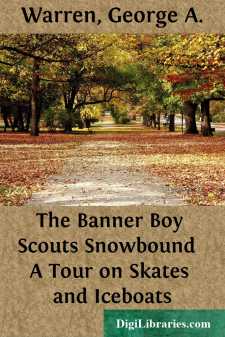 Once more it is my privilege to offer you a new volume wherein I have endeavored to relate further interesting adventures in which the members of Stanhope Troop of Boy Scouts take part. Most of my readers, I feel sure, remember Paul, Jud, Bobolink, Jack and many of the other characters, and will gladly greet them as old friends.

To such of you who may be making the acquaintance of these manly young chaps for the first time I can only say this. I trust your interest in their various doings along the line of scoutcraft will be strong enough to induce you to secure the previous volumes in this series in order to learn at first hand of the numerous achievements they have placed to their credit.

The boys comprising the original Red Fox Patrol won the beautiful banner they own in open competition with other rival organizations. From that day, now far in the past, Stanhope Troop has been known as the Banner Boy Scouts. Its possession .gn +1 has always served as an inspiration to Paul and his many staunch comrades. Every time they see its silken folds unfurled at the head of their growing marching line they feel like renewing the vows to which they so willingly subscribed on first joining the organization.

Many of their number, too, are this day proudly wearing on their chests the medals they have won through study, observation, service, thrift, or acts of heroism, such as saving human life at the risk of their own.

I trust that all my many young readers will enjoy the present volume fully as much as they did those that have appeared before now. Hoping, then, to meet you all again before a great while in the pages of another book; and with best wishes for every lad who aspires to climb the ladder of leadership in his home troop, believe me,

THE BANNER BOY SCOUTS SNOWBOUND CHAPTER I ON THE FROZEN BUSHKILL

“Watch Jack cut his name in the ice, fellows!”

“I wish I could do the fancy stunts on skates he manages to pull off. It makes me green with envy to watch Jack Stormways do that trick.”

“Oh, shucks! what’s the use of saying that, Wallace Carberry, when everybody knows your strong suit is long-distance skating? The fact is both the Carberry twins are as much at home on the ice as I am when I get my knees under the supper table.”

“That’s kind of you to throw bouquets my way, Bobolink. But, boys, stop and think. Here it is—only four days now to Christmas, and the scouts haven’t made up their minds yet where to spend the glorious holidays.”

“Hold on there, Bluff Shipley! If you keep on falling all over yourself like that you’ll have to take a whole week to rest up.”

“All the same,” remarked the boy who answered to the odd name of Bobolink, “it’s high time we scouts settled that important matter for good.”

“The assistant scout-master, Paul Morrison, has called a meeting at headquarters for to-night, you understand, boys,” said the fancy skater, who had just cut the name of Paul Morrison in the smooth, new ice of the Bushkill river....