The Banner Boy Scouts Or, The Struggle for Leadership 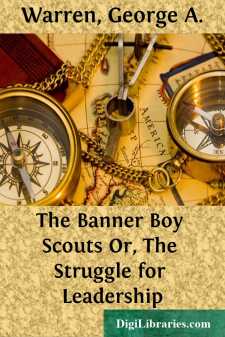 A MEETING IN THE BARN

"Call the roll, somebody, won't you?"

"Shall I strike a match, Paul?"

"Not on your life, Bobolink. That crowd of Ted Slavin's is out, looking for us. Somebody must have leaked, or else Ted was tipped off. We've got to be mighty cautious, I tell you, if we want to give them the slip."

"For goodness sake; won't somebody please pound Bluff Shipley on the back, and make him bite his twisted tongue, so he can talk straight?" cried a pleading voice.

There must have been a streak of authority in the tone used by Paul Morrison when he spoke this last word; every one of the other six boys crouched there, craning his neck, and listening to catch the unusual sound that had apparently reached the trained ears of their leader.

The woods surrounded the boys on all sides, gloomy, and full of mystifying noises.

Yet Paul knew full well just what every one of the sounds meant. An owl called mournfully to its mate from a hollow tree. Katydids and merry crickets added their shrill music to the chorus of that late summer night. Even a colony of tree frogs solemnly chanted their appeal for "more rain."

During the day just ended six fellows in the thriving town of Stanhope had received urgent telephone calls from Paul, who was an only son of the leading doctor in the place.

And each boy had promised to meet him at the Three Oaks by the time the clock in the church steeple had struck eight.

It was even now booming out the hour.

When the last stroke died away, the most impatient among the gathered boys moved restlessly.

"Follow me, fellows," said Paul, in a low, thrilling tone.

"Where are we heading for?" queried one, who had as yet failed to express his feelings in the matter.

This was Wallace Carberry, the sober member of the pair known far and wide as the Carberry Twins; his mate, William, being his exact counterpart in every particular, when he chose to repress the good-natured grin that usually marked his fate.

"To the Shipley barn; single file; and silence is the watchword!"

Paul Morrison had long enjoyed the confidence of his comrades in most matters pertaining to outdoor sports. A healthy lad, both in mind and body, he was never so happy as when studying the secrets of Nature in wood and meadow; or in playing any of the various strenuous games to which all boys with red blood in their veins are addicted.

And when he sent out his mysterious request that some of his most intimate friends meet him on this night, as he had a communication of importance to put up to them, the greatest curiosity made itself manifest.

Paul never suggested ordinary things. More than once he had engineered some game that brought honor and glory to the boys of Stanhope; and remembering these satisfactory "stunts" of old, it was no wonder these fellows had come to the place of meeting without a single exception.

With Bluff Shipley close upon the heels of the leader, and Robert Oliver Link, whose name had long since been corrupted into Bobolink, bringing up the rear, the seven lads trailed through the woods, following some path with which they were evidently more or less familiar....