The Banner Boy Scouts on a Tour, or, The Mystery of Rattlesnake Mountain 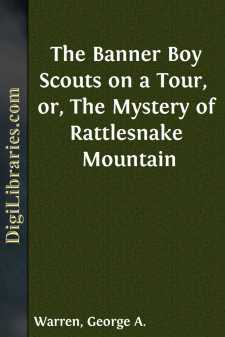 "Here we are at your father's feed store, Joe!"

"Yes, but there isn't a glimmer of a light. Didn't you say he was going to stay here till you came from the meeting?"

"Shucks! he just got tired waiting, and went home long ago; you can trot along now by your lonesome, Joe."

"Listen! didn't you hear it, fellows? What was that sound?"

The four boys stood, as Joe asked this question, almost holding their breath with awe, while no doubt their hearts pounded away like so many trip-hammers.

It was after ten o'clock at night, and the town of Stanhope, nestling on the bank of the Bushkill, usually closed its business doors by nine, save on Saturdays.

This being the case, it was naturally very quiet on Anderson street, even though electric lights and people abounded on Broad street, the main thoroughfare, just around the corner.

These lads belonged to a troop of Boy Scouts that had been organized the preceding summer. They wore the regular khaki suits that always distinguish members of the far-reaching organization, and one of them even carried a bugle at his side.

The first speaker was Paul Morrison, the scout leader, to whom much of the labor of getting the troop started had fallen. Paul was the son of the leading doctor in Stanhope.

His comrades were the bugler, known as Bobolink, because he chanced to answer to the name of Robert Oliver Link; Jack Stormways, Paul's particular chum; and Joe Clausin, the one who had asked his friends to stroll around in his company, to the feed store, where he expected to find his father waiting for him.

The lads had been attending a regular weekly meeting of the troop at one of the churches that offered them the free use of a gymnasium.

"There's no light inside," said Bobolink, in a husky voice, "but the door's half open, boys!"

This announcement sent another thrill through the group.

Anyone unacquainted with the wearers of the Scout uniforms might even imagine that they had been attacked by a spasm of fear; but at least two members of the group had within recent times proven their valor in a fashion that the people of Stanhope would never forget.

In the preceding volume of this series, issued under the name of "The Banner Boy Scouts; or, The Struggle for Leadership," I related how the boys got together and organized their patrol and troop. Of course, there was considerable opposition, from jealous rivals; but in the end the boys of Stanhope won their right to a prize banner by excelling the troops from the neighboring towns in many of the things a true scout should know and practice. Hence, no one who has perused the first book of this series will imagine for an instant that any of these lads were timid, simply because they clustered together, and felt their pulses quiver with excitement.

"Do you hear that sound again, Joe?" demanded Paul, presently, as all listened.

"I thought I did just then," answered Joe Clausin, drawing a long breath; "but perhaps it was only imagination. Dad's been doing more work than he ought, lately....