The Banner Boy Scouts Afloat or, the Secret of Cedar Island 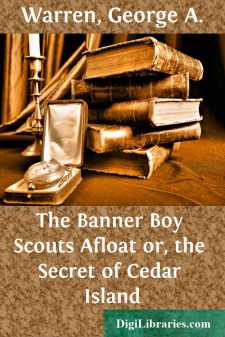 CHAPTER I THE MYSTERIOUS BOXES

"What are you limping for, Bobolink?"

"Oh! shucks! I see there's no use trying to hide anything from your sharp eyes, Jack Stormways. Guess I just about walked my feet off today, goin' fishin' with our patrol leader, away over to the Radway River, and about six miles up."

"Have any luck, Bobolink?" instantly demanded the third member of the group of three half-grown boys, who were passing after nightfall through some of the partly deserted streets on the outskirts of the thriving town of Stanhope; and whose name it might be stated was Tom Betts.

"Well, I should say, yes. Between us we got seven fine bass, and a pickerel. By the way, I caught that pickerel; Paul, he looked after the bass end of the string, and like the bully chap he is divided with me;" and the boy who limped chuckled as he said this, showing that he could appreciate a joke, even when it was on himself.

About everybody in town called him Bobolink; and what boy could do otherwise, seeing that his real name was Robert O. Link?

As the trio of lads were all dressed in the khaki suits known all over the world nowadays as typifying Boy Scouts, it could be readily taken for granted that they belonged to the Stanhope Troop.

Already were there three full patrols enlisted, and wearing uniforms; while a fourth was in process of forming. The ones already in the field were known as, first, the Red Fox, to which these three lads belonged; then the Gray Fox, and finally the Black Fox. But as they had about exhausted the color roster of the fox family, the chances were that the next patrol would have to start on a new line when casting about for a name that would stamp their identity, and serve as a totem.

An efficient scout master had been secured in the person of a young man by the name of Mr. Gordon, who cheerfully accompanied the lads on their outings, and attended many of their meetings. But being a traveling salesman, Mr. Gordon often had to be away from home for weeks at a time.

When these lapses occurred, his duties fell upon the shoulders of PaulMorrison, who not only filled the position of leader to the Red FoxPatrol, but being a first-class scout, had received his commission fromHeadquarters that entitled him to act as assistant scout master to thewhole troop during the absence of Mr. Gordon.

"How did you like it up on the Radway?" continued the one who had made the first inquiry, Jack Stormways, whose father owned a lumber yard and planing mill just outside the limits of the town, which was really the goal of their present after-supper walk.

"Great place, all right," replied Bobolink. "Paul kept calling my attention to all the things worth seeing. He seems to think a heap of the old Radway. For my part, I rather fancy our own tight little river, the Bushkill."

"Well, d'ye know, that's one reason I asked how you liked it," Jack went on. "Paul seemed so much taken with that region over there, I've begun to get a notion in my head he's fixing a big surprise, and that perhaps at the meeting to-night he may spring it on us."

"Tell me about that, will you?" exclaimed Bobolink, who was given to certain harmless slang ways whenever he became in the least excited, as at present....