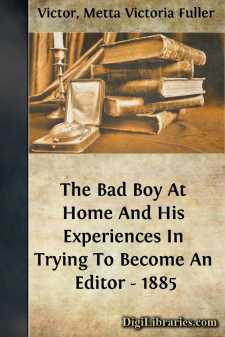 I've been intending ever since I got home from Yourope, to begin ritin' in a diry, but I ain't had no time, cos my chum Jimmy and me has been puttin' in our days havin' fun. I've got to give all that sorter thing up now, cos I've accepted a persisshun in a onherabel perfesshun, and wen I get to be a man, and reech the top rung of the ladder, I'm goin' to mak' New York howl.

Pa, he wanted me to go to skule, but I culdn't see it a tall, cos a feller wot's alwus goin' to skule don't never kno nothin' but base-ballin' and prize fitin' wen 'he gets thru. All them fellers wot rite in dirys begin by usin a lot of hyfalutin wurds wot sound orful big but don't meen nothin; so I guess I'll be in the fashun, so here goes:

You're only a quire of "common noose" paper, Mr. Diry, so you needn't put on so menny airs over your cleen wite dress, wot only needs a morocker lether mantel and gilt braceletts to make you look like you b'longed to the Astor house dude.

We all know you was maid of rags, and them rags might once have bean in the mazey, lacey laberinths of wite linnin wot audashusly pressed 'gainst the tender form of Lillyan, the dudine.

If you warn't there you mite have ben all ablaze with chane stitches and crushed oniyun stripes, closely incircling a cupple of been-poles—no, not eggsactly been-poles, but the sharpley, shadderly lower lims of Sarah Jane Burnhard, the actress wot got mashed on Dam-all-her.

Then, agen, you mite have ben on some infantile prospecktive Preserdent, but you didn't stay on him long, cos baby's and safety-pins maid you tired.

Enyway you've got a histery, cos them littel black spots on your rite bussum looks like they mite wunce hav ben part of Mrs. Dr. Walker's patent backackshun, maskuline, dress-reform trowsers, wot she sent to the paper-mill to get ground up inter paper to mak books for the enlitenin of the wimmin of our country.

How's that for high, Mr. Diry? My muse come playguey neer running away with me, so I had to wistle "down brakes," and slow her up. Now I'll begin to record my doins on your pages, so that, shuld the toes of my boots be applide to the patent bucket early in my useful carreer, the hull wurld'll kno wot a treassure socieaty has lost. I ain't givin you eny biled lasses candie, but don't you let your memmerizin orgins lose site of the fact that I, Georgie, the Bad Boy wot's ben to Yourope, ain't no slouch.

My pa sez I'm a geneyus. I guess he's 'bout rite, ony he orter sed I was a buddin' one, 'cos my hankerin' after a perfeshunal carrieer has led me to axcept a posishun in the publick-opinyun-moldin' shop wots known as the Daily Buster, Joe Gilley, edittur and proprieat-her. Subskripshun price, $5 per yare. No trubbel to sine receits.