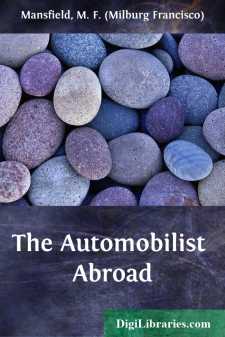 Chapter I An Appreciation of the Automobile

We have progressed appreciably beyond the days of the old horseless carriage, which, it will be remembered, retained even the dashboard.

To-day the modern automobile somewhat resembles, in its outlines, across between a decapod locomotive and a steam fire-engine, or at least something concerning the artistic appearance of which the layman has very grave doubts.

The control of a restive horse, a cranky boat, or even a trolley-car on rails is difficult enough for the inexperienced, and there are many who would quail before making the attempt; but to the novice in charge of an automobile, some serious damage is likely enough to occur within an incredibly short space of time, particularly if he does not take into account the tremendous force and power which he controls merely by the moving of a tiny lever, or by the depressing of a pedal.

Any one interested in automobiles should know something of the literature of the subject, which, during the last decade, has already become formidable.

In English the literature of the automobile begins with Mr. Worby Beaumont's Cantor Lectures (1895), and the pamphlet by Mr. R. Jenkins on "Power Locomotion on the Highways," published in 1896.

In the library of the Patent Office in London the literature of motor road vehicles already fills many shelves. The catalogue is interesting as showing the early hopes that inventors had in connection with steam as a motive power for light road vehicles, and will be of value to all who are interested in the history of the movement or the progress made in motor-car design.

In France the Bibliothèque of the Touring Club de France contains a hundred entries under the caption "Automobiles," besides complete files of eleven leading journals devoted to that industry. With these two sources of information at hand, and aided by the records of the Automobile Club de France and the Automobile Club of Great Britain and Ireland, the present-day historian of the automobile will find the subject well within his grasp.

"A look of anguish underneath the car,Another start; a squeak, a grunt, a jar!The Aspiration pipe is working loose!The vapour can't get out! And there you are!"

"Strange is it not, that of the myriads whoHave Empty Tanks and know not what to do,Not one will tell of it when he Returns.As for Ourselves, why, we deny it, too."

The one perfectly happy man in an automobile is he who drives, steers, or "runs the thing," even though he be merely the hired chauffeur. For proof of this one has only to note how readily others volunteer to "spell him a bit," as the saying goes....