The Autobiography of St. Ignatius

by Ignatius, of Loyola, Saint 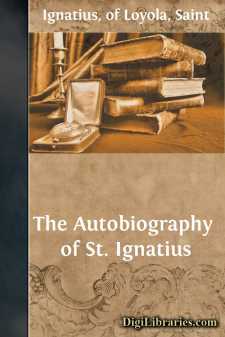 This account of the life of St. Ignatius, dictated by himself, is considered by the Bollandists the most valuable record of the great Founder of the Society of Jesus. The editors of the Stimmen Aus Maria Laach, the German review, as well as those of the English magazine, The Month, tell us that it, more than any other work, gives an insight into the spiritual life of St. Ignatius. Few works in ascetical literature, except the writings of St. Teresa and St. Augustine, impart such a knowledge of the soul.

To understand fully the Spiritual Exercises, we should know something of the man who wrote them. In this life of St. Ignatius, told in his own words, we acquire an intimate knowledge of the author of the Exercises. We discern the Saint's natural disposition, which was the foundation of his spiritual character. We learn of his conversion, his trials, the obstacles in his way, the heroism with which he accomplished his great mission.

This autobiography of St. Ignatius is the groundwork of all the great lives of him that have been written.

Bartoli draws from it, Genelli develops it, the recent magnificent works of Father Clair, S.J., and of Stewart Rose are amplifications of this simple story of the life of St. Ignatius.

The Saint in his narrative always refers to himself in the third person, and this mode of speech has here been retained. Many persons who have neither the time, nor, perhaps, the inclination, to read larger works, will read, we trust, with pleasure and profit this autobiography.

Ignatius, as he lay wounded in his brother's house, read the lives of the saints to while away the time. Touched by grace, he cried, "What St. Francis and St. Dominic have done, that, by God's grace, I will do." May this little book, in like manner, inspire its readers with the desire of imitating St. Ignatius.

Preface of Father Louis Gonzalez, S.J., to the "Acts of St. Ignatius," received from the lips of the Saint and translated into Latin by Father Hannibal Codretto, S.J.

Preface of the Writer

Jesus, Mary. In the year 1553, one Friday morning, August 4, the eve of the feast of Our Lady of the Snows, while St. Ignatius was in the garden, I began to give him an account of my soul, and, among other things, I spoke to him of how I was tempted by vain glory. The spiritual advice he gave me was this: "Refer everything that you do to God; strive to offer Him all the good you find in yourself, acknowledging that this comes from God, and thank Him for it." The advice given to me on this occasion was so consoling to me that I could not refrain from tears. St. Ignatius then related to me that for two years he had struggled against vain glory; so much so, indeed, that when he was about to embark for Jerusalem at Barcelona he did not dare to tell any one where he was going. He told me, moreover, that since that time his soul had experienced great peace in regard to this matter.

An hour or two later we went to dinner, and, while Master Polancus and I were dining with him, St. Ignatius said that Master Natalis and others of the Society had often asked him to give a narrative of his life, but he had never as yet decided to do so. On this occasion, however, after I had spoken to him, he reflected upon it alone. He was favorably inclined toward it. From the way he spoke, it was evident God had enlightened him. He had resolved to manifest the main points of his interior life up to the present, and had concluded that I was the one to whom he would make these things known....