The Autobiography of Methuselah 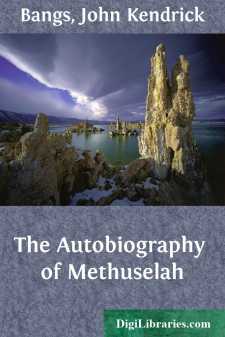 Having recently passed into what my great-grandson Shem calls my Anecdotage, it has occurred to me that perhaps some of the recollections of a more or less extended existence upon this globular mass of dust and water that we are pleased to call the earth, may prove of interest to posterity, and I have accordingly, at the earnest solicitation of my grandson, Noah, and his sons, Shem, Ham and Japhet, consented to put them into permanent literary form. In view of the facts that at this writing, ink and paper and pens have not as yet been invented, and that we have no capable stenographers among our village folk, and that because of my advanced years I should find great difficulty in producing my manuscript on a type-writing machine with my gouty fingers—for, of the luscious fluid of the grape have I been a ready, though never over-abundant, consumer—even if I were familiar with the keyboard of such an instrument, or, if indeed, there were any such instrument to facilitate the work—in view of these facts, I say, I have been compelled to make use of the literary methods of the Egyptians, and with hammer and chisel, to gouge out my "Few Remarks" upon such slabs of stone as I can find upon my native heath.

It is quite interesting, in the light of the contentions of history as to man's earliest realization that the earth is round, to find Methuselah speaking in this fashion. It would seem from this that the real facts had dawned upon the Patriarch's mind even at this early period, and one is therefore disposed to regard as less apocryphal the anecdote recorded in Volume III, Chapter 38, of "The Life and Voyages of Noah," wherein Adam, after being ejected from the Garden of Eden, asked by Cain if he believes the world to be round like an orange, replies:

"I used to think so, my son, but under prevailing conditions I am forced into a more or less definite suspicion that it is elliptical, like a lemon."—Editor.

Ye scribe decides not to use Egyptian writing.

Let us hope that my story will not prove as heavy as my manuscript. It is hardly necessary for me to assure the indulgent reader that such a method of composition is not altogether an easy task for a man who is shortly to celebrate his nine hundred and sixty-fifth birthday, more especially since at no time in my life have I studied the arts of the Stone-Cutter, or been a master in the Science of Quarrying. Nor is it easy at my advanced age, with a back no longer sinewy, and muscles grown flabby from lack of active exercise, for me to lift a virgin sheet of stone from the ground to the surface of my writing-desk without a derrick, but these are, after all, minor difficulties, and I shall let no such insignificant obstacles stand between me and the great purpose I have in mind. I shall persist in the face of all in the writing of this Autobiography if for no worthier object than to provide occupation for my leisure hours which, in these patriarchal days to which I have attained, sometimes hang heavy on my hands. I know not why it should so transpire, but it is the fact that since I passed my nine hundred and fiftieth birthday I have had little liking for the pleasures which modern society most affects....