The Autobiography of a Quack and the Case of George Dedlow 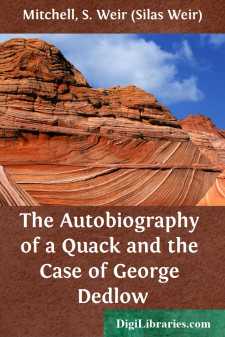 At this present moment of time I am what the doctors call an interesting case, and am to be found in bed No. 10, Ward 11, Massachusetts General Hospital. I am told that I have what is called Addison's disease, and that it is this pleasing malady which causes me to be covered with large blotches of a dark mulatto tint. However, it is a rather grim subject to joke about, because, if I believed the doctor who comes around every day, and thumps me, and listens to my chest with as much pleasure as if I were music all through—I say, if I really believed him, I should suppose I was going to die. The fact is, I don't believe him at all. Some of these days I shall take a turn and get about again; but meanwhile it is rather dull for a stirring, active person like me to have to lie still and watch myself getting big brown and yellow spots all over me, like a map that has taken to growing.

The man on my right has consumption—smells of cod-liver oil, and coughs all night. The man on my left is a down-easter with a liver which has struck work; looks like a human pumpkin; and how he contrives to whittle jackstraws all day, and eat as he does, I can't understand. I have tried reading and tried whittling, but they don't either of them satisfy me, so that yesterday I concluded to ask the doctor if he couldn't suggest some other amusement.

I waited until he had gone through the ward, and then seized my chance, and asked him to stop a moment.

I thought him rather disrespectful, but I replied, "Something to do, doctor."

He thought a little, and then said: "I'll tell you what to do. I think if you were to write out a plain account of your life it would be pretty well worth reading. If half of what you told me last week be true, you must be about as clever a scamp as there is to be met with. I suppose you would just as lief put it on paper as talk it."

After he left I lay awhile thinking over the matter. I knew well that I was what the world calls a scamp, and I knew also that I had got little good out of the fact. If a man is what people call virtuous, and fails in life, he gets credit at least for the virtue; but when a man is a—is—well, one of liberal views, and breaks down, somehow or other people don't credit him with even the intelligence he has put into the business. This I call hard. If I did not recall with satisfaction the energy and skill with which I did my work, I should be nothing but disgusted at the melancholy spectacle of my failure. I suppose that I shall at least find occupation in reviewing all this, and I think, therefore, for my own satisfaction, I shall try to amuse my convalescence by writing a plain, straightforward account of the life I have led, and the various devices by which I have sought to get my share of the money of my countrymen. It does appear to me that I have had no end of bad luck.

As no one will ever see these pages, I find it pleasant to recall for my own satisfaction the fact that I am really a very remarkable man. I am, or rather I was, very good-looking, five feet eleven, with a lot of curly red hair, and blue eyes. I am left-handed, which is another unusual thing. My hands have often been noticed. I get them from my mother, who was a Fishbourne, and a lady. As for my father, he was rather common. He was a little man, red and round like an apple, but very strong, for a reason I shall come to presently. The family must have had a pious liking for Bible names, because he was called Zebulon, my sister Peninnah, and I Ezra, which is not a name for a gentleman. At one time I thought of changing it, but I got over it by signing myself "E. Sanderaft."

Where my father was born I do not know, except that it was somewhere in New Jersey, for I remember that he was once angry because a man called him a Jersey Spaniard....