The Augsburg Confession The confession of faith, which was submitted to His Imperial Majesty Charles V at the diet of Augsburg in the year 1530 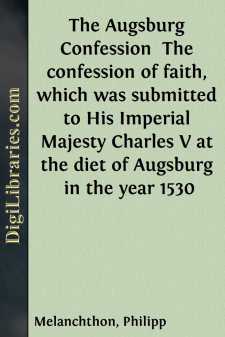 Article I: Of God.

Our Churches, with common consent, do teach that the decree of the Council of Nicaea concerning the Unity of the Divine Essence and concerning the Three Persons, is true and to be believed without any doubting; that is to say, there is one Divine Essence which is called and which is God: eternal, without body, without parts, of infinite power, wisdom, and goodness, the Maker and Preserver of all things, visible and invisible; and yet there are three Persons, of the same essence and power, who also are coeternal, the Father the Son, and the Holy Ghost. And the term "person" they use as the Fathers have used it, to signify, not a part or quality in another, but that which subsists of itself.

They condemn all heresies which have sprung up against this article, as the Manichaeans, who assumed two principles, one Good and the other Evil—also the Valentinians, Arians, Eunomians, Mohammedans, and all such. They condemn also the Samosatenes, old and new, who, contending that there is but one Person, sophistically and impiously argue that the Word and the Holy Ghost are not distinct Persons, but that "Word" signifies a spoken word, and "Spirit" signifies motion created in things.

Also they teach that since the fall of Adam all men begotten in the natural way are born with sin, that is, without the fear of God, without trust in God, and with concupiscence; and that this disease, or vice of origin, is truly sin, even now condemning and bringing eternal death upon those not born again through Baptism and the Holy Ghost.

They Condemn the Pelagians and others who deny that original depravity is sin, and who, to obscure the glory of Christ's merit and benefits, argue that man can be justified before God by his own strength and reason.

Article III: Of the Son of God.

Also they teach that the Word, that is, the Son of God, did assume the human nature in the womb of the blessed Virgin Mary, so that there are two natures, the divine and the human, inseparably enjoined in one Person, one Christ, true God and true man, who was born of the Virgin Mary, truly suffered, was crucified, dead, and buried, that He might reconcile the Father unto us, and be a sacrifice, not only for original guilt, but also for all actual sins of men.

He also descended into hell, and truly rose again the third day; afterward He ascended into heaven that He might sit on the right hand of the Father, and forever reign and have dominion over all creatures, and sanctify them that believe in Him, by sending the Holy Ghost into their hearts, to rule, comfort, and quicken them, and to defend them against the devil and the power of sin.

The same Christ shall openly come again to judge the quick and the dead, etc., according to the Apostles' Creed.

Also they teach that men cannot be justified before God by their own strength, merits, or works, but are freely justified for Christ's sake, through faith, when they believe that they are received into favor, and that their sins are forgiven for Christ's sake, who, by His death, has made satisfaction for our sins....