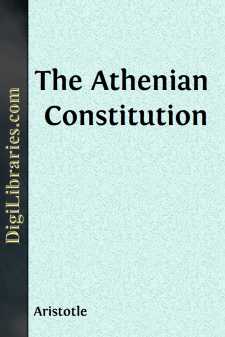 ...[They were tried] by a court empanelled from among the noble families, and sworn upon the sacrifices. The part of accuser was taken by Myron. They were found guilty of the sacrilege, and their bodies were cast out of their graves and their race banished for evermore. In view of this expiation, Epimenides the Cretan performed a purification of the city.

After this event there was contention for a long time between the upper classes and the populace. Not only was the constitution at this time oligarchical in every respect, but the poorer classes, men, women, and children, were the serfs of the rich. They were known as Pelatae and also as Hectemori, because they cultivated the lands of the rich at the rent thus indicated. The whole country was in the hands of a few persons, and if the tenants failed to pay their rent they were liable to be haled into slavery, and their children with them. All loans secured upon the debtor's person, a custom which prevailed until the time of Solon, who was the first to appear as the champion of the people. But the hardest and bitterest part of the constitution in the eyes of the masses was their state of serfdom. Not but what they were also discontented with every other feature of their lot; for, to speak generally, they had no part nor share in anything.

Now the ancient constitution, as it existed before the time of Draco, was organized as follows. The magistrates were elected according to qualifications of birth and wealth. At first they governed for life, but subsequently for terms of ten years. The first magistrates, both in date and in importance, were the King, the Polemarch, and the Archon. The earliest of these offices was that of the King, which existed from ancestral antiquity. To this was added, secondly, the office of Polemarch, on account of some of the kings proving feeble in war; for it was on this account that Ion was invited to accept the post on an occasion of pressing need. The last of the three offices was that of the Archon, which most authorities state to have come into existence in the time of Medon. Others assign it to the time of Acastus, and adduce as proof the fact that the nine Archons swear to execute their oaths 'as in the days of Acastus,' which seems to suggest that it was in his time that the descendants of Codrus retired from the kingship in return for the prerogatives conferred upon the Archon. Whichever way it may be, the difference in date is small; but that it was the last of these magistracies to be created is shown by the fact that the Archon has no part in the ancestral sacrifices, as the King and the Polemarch have, but exclusively in those of later origin. So it is only at a comparatively late date that the office of Archon has become of great importance, through the dignity conferred by these later additions. The Thesmothetae were many years afterwards, when these offices had already become annual, with the object that they might publicly record all legal decisions, and act as guardians of them with a view to determining the issues between litigants....