The Art of Travel Shifts and Contrivances Available in Wild Countries 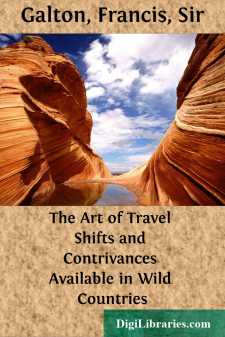 To those who meditate Travel.--Qualifications for a Traveller.--If you have health, a great craving for adventure, at least a moderate fortune, and can set your heart on a definite object, which old travellers do not think impracticable, then--travel by all means. If, in addition to these qualifications, you have scientific taste and knowledge, I believe that no career, in time of peace, can offer to you more advantages than that of a traveller. If you have not independent means, you may still turn travelling to excellent account; for experience shows it often leads to promotion, nay, some men support themselves by travel. They explore pasture land in Australia, they hunt for ivory in Africa, they collect specimens of natural history for sale, or they wander as artists.

Reputed Dangers of Travel.--A young man of good constitution, who is bound on an enterprise sanctioned by experienced travellers, does not run very great risks. Let those who doubt, refer to the history of the various expeditions encouraged by the Royal Geographical Society, and they will see how few deaths have occurred; and of those deaths how small a proportion among young travellers. Savages rarely murder new-comers; they fear their guns, and have a superstitious awe of the white man's power: they require time to discover that he is not very different to themselves, and easily to be made away with. Ordinary fever are seldom fatal to the sound and elastic constitution of youth, which usually has power to resist the adverse influences of two or three years of wild life.

Advantages of Travel.--It is no slight advantage to a young man, to have the opportunity for distinction which travel affords. If he plans his journey among scenes and places likely to interest the stay-at-home public, he will probably achieve a reputation that might well be envied by wiser men who have not had his opportunities.

The scientific advantages of travel are enormous to a man prepared to profit by them. He sees Nature working by herself, without the interference of human intelligence; and he sees her from new points of view; he has also undisturbed leisure for the problems which perpetually attract his attention by their novelty. The consequence is, that though scientific travellers are comparatively few, yet out of their ranks a large proportion of the leaders in all branches of science has been supplied. It is one of the most grateful results of a journey to the young traveller to find himself admitted, on the ground of his having so much of special interest to relate, into the society of men with whose names he had long been familiar, and whom he had reverenced as his heroes.

To obtain Information.--The centres of information respecting rude and savage countries are the Geographical, Ethnological, and Anthropological societies at home and abroad. Any one intending to travel should put himself into communication with the Secretary, and become a member of one or more of these Societies; he will not only have access to books and maps, but will be sure to meet with sympathy, encouragement, and intelligent appreciation....