The Art of Public Speaking 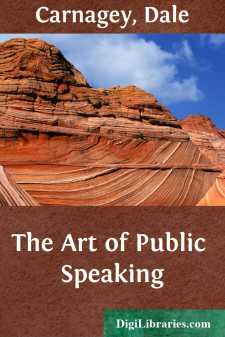 CHAPTER I ACQUIRING CONFIDENCE BEFORE AN AUDIENCE

There is a strange sensation often experienced in the presence of an audience. It may proceed from the gaze of the many eyes that turn upon the speaker, especially if he permits himself to steadily return that gaze. Most speakers have been conscious of this in a nameless thrill, a real something, pervading the atmosphere, tangible, evanescent, indescribable. All writers have borne testimony to the power of a speaker's eye in impressing an audience. This influence which we are now considering is the reverse of that picture—the power their eyes may exert upon him, especially before he begins to speak: after the inward fires of oratory are fanned into flame the eyes of the audience lose all terror.—William Pittenger, Extempore Speech.

Students of public speaking continually ask, "How can I overcome self-consciousness and the fear that paralyzes me before an audience?"

Did you ever notice in looking from a train window that some horses feed near the track and never even pause to look up at the thundering cars, while just ahead at the next railroad crossing a farmer's wife will be nervously trying to quiet her scared horse as the train goes by?

How would you cure a horse that is afraid of cars—graze him in a back-woods lot where he would never see steam-engines or automobiles, or drive or pasture him where he would frequently see the machines?

Apply horse-sense to ridding yourself of self-consciousness and fear: face an audience as frequently as you can, and you will soon stop shying. You can never attain freedom from stage-fright by reading a treatise. A book may give you excellent suggestions on how best to conduct yourself in the water, but sooner or later you must get wet, perhaps even strangle and be "half scared to death." There are a great many "wetless" bathing suits worn at the seashore, but no one ever learns to swim in them. To plunge is the only way.

Practise, practise, PRACTISE in speaking before an audience will tend to remove all fear of audiences, just as practise in swimming will lead to confidence and facility in the water. You must learn to speak by speaking.

The Apostle Paul tells us that every man must work out his own salvation. All we can do here is to offer you suggestions as to how best to prepare for your plunge. The real plunge no one can take for you. A doctor may prescribe, but you must take the medicine.

Do not be disheartened if at first you suffer from stage-fright. Dan Patch was more susceptible to suffering than a superannuated dray horse would be. It never hurts a fool to appear before an audience, for his capacity is not a capacity for feeling. A blow that would kill a civilized man soon heals on a savage. The higher we go in the scale of life, the greater is the capacity for suffering.

For one reason or another, some master-speakers never entirely overcome stage-fright, but it will pay you to spare no pains to conquer it. Daniel Webster failed in his first appearance and had to take his seat without finishing his speech because he was nervous. Gladstone was often troubled with self-consciousness in the beginning of an address. Beecher was always perturbed before talking in public.

Blacksmiths sometimes twist a rope tight around the nose of a horse, and by thus inflicting a little pain they distract his attention from the shoeing process. One way to get air out of a glass is to pour in water.

Be Absorbed by Your Subject

Apply the blacksmith's homely principle when you are speaking. If you feel deeply about your subject you will be able to think of little else. Concentration is a process of distraction from less important matters. It is too late to think about the cut of your coat when once you are upon the platform, so centre your interest on what you are about to say—fill your mind with your speech-material and, like the infilling water in the glass, it will drive out your unsubstantial fears.

Self-consciousness is undue consciousness of self, and, for the purpose of delivery, self is secondary to your subject, not only in the opinion of the audience, but, if you are wise, in your own. To hold any other view is to regard yourself as an exhibit instead of as a messenger with a message worth delivering. Do you remember Elbert Hubbard's tremendous little tract, "A Message to Garcia"? The youth subordinated himself to the message he bore. So must you, by all the determination you can muster. It is sheer egotism to fill your mind with thoughts of self when a greater thing is there—TRUTH....