The Armies of Labor A chronicle of the organized wage-earners 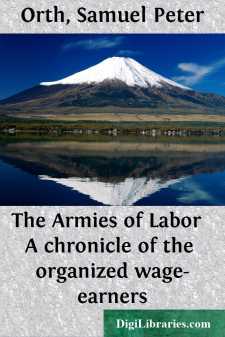 CHAPTER I. THE BACKGROUND

Three momentous things symbolize the era that begins its cycle with the memorable year of 1776: the Declaration of Independence, the steam engine, and Adam Smith's book, "The Wealth of Nations." The Declaration gave birth to a new nation, whose millions of acres of free land were to shift the economic equilibrium of the world; the engine multiplied man's productivity a thousandfold and uprooted in a generation the customs of centuries; the book gave to statesmen a new view of economic affairs and profoundly influenced the course of international trade relations.

The American people, as they faced the approaching age with the experiences of the race behind them, fashioned many of their institutions and laws on British models. This is true to such an extent that the subject of this book, the rise of labor in America, cannot be understood without a preliminary survey of the British industrial system nor even without some reference to the feudal system, of which English society for many centuries bore the marks and to which many relics of tenure and of class and governmental responsibility may be traced. Feudalism was a society in which the status of an individual was fixed: he was underman or overman in a rigid social scale according as he considered his relation to his superiors or to his inferiors. Whatever movement there was took place horizontally, in the same class or on the same social level. The movement was not vertical, as it so frequently is today, and men did not ordinarily rise above the social level of their birth, never by design, and only perhaps by rare accident or genius. It was a little world of lords and serfs; of knights who graced court and castle, jousted at tournaments, or fought upon the field of battle; and of serfs who toiled in the fields, served in the castle, or, as the retainers of the knight, formed the crude soldiery of medieval days. For their labor and allegiance they were clothed and housed and fed. Yet though there were feast days gay with the color of pageantry and procession, the worker was always in a servile state, an underman dependent upon his master, and sometimes looking upon his condition as little better than slavery.

With the break-up of this rigid system came in England the emancipation of the serf, the rise of the artisan class, and the beginnings of peasant agriculture. That personal gravitation which always draws together men of similar ambitions and tasks now began to work significant changes in the economic order. The peasantry, more or less scattered in the country, found it difficult to unite their powers for redressing their grievances, although there were some peasant revolts of no mean proportions. But the artisans of the towns were soon grouped into powerful organizations, called guilds, so carefully managed and so well disciplined that they dominated every craft and controlled every detail in every trade. The relation of master to journeyman and apprentice, the wages, hours, quantity, and quality of the output, were all minutely regulated....