The Arkansaw Bear A Tale of Fanciful Adventure 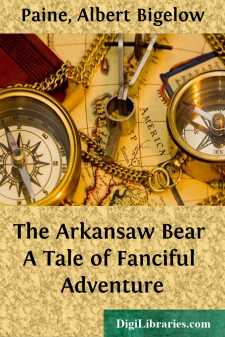 THE MEETING OF BOSEPHUS AND HORATIO   "Oh, 'twas down in the woods of the Arkansaw,And the night was cloudy and the wind was raw,   And he didn't have a bed and he didn't have a bite,And if he hadn't fiddled he'd a travelled all night." BOSEPHUS paused in his mad flight to listen. Surely this was someone playing the violin, and the tune was familiar.

It was the "Arkansaw Traveller" and close at hand. The little boy tore hastily through the brush in the direction of the music. The moon had come up, and he could see quite well, but he did not pause to pick his way. As he stepped from the thicket out into an open space the fiddling ceased. It was bright moonlight there, too, and as Bosephus took in the situation his blood turned cold.

In the center of the open space was a large tree. Backed up against this tree, and looking straight at the little boy, with fiddle in position for playing, and uplifted bow, was a huge Black Bear!

Bosephus looked at the Bear, and the Bear looked at Bosephus.

"Who are you, and what are you doing here?" he roared.

"Guess you are!" laughed the Bear, as he drew the bow across the strings.

"Neither have I!" grinned the Bear, "that is, none worth mentioning. A young rabbit or two, perhaps, and a quart or so of blackberries, but nothing real good and strengthening to fill up on." Then he regarded Bosephus reflectively, and began singing as he played softly:—

"Oh, we'll have a little music first and then some supper, too,But before we have the supper we will play the music through."

But Bosephus, or Bo, as he was called, was very much disturbed. So far as he could see there was no prospect of supper for anybody but the Bear.

"My name is Horatio," he continued. "Called Ratio for short. But I don't like it. Call me Horatio, in full, please."

"MAYBE YOU CAN PLAY IT YOURSELF."

"See that you don't forget it!" grunted the Bear. "I don't like familiarity in my guests. But I am clear away from the song I was singing when you came tearing out of that thicket. Seems like I never saw anybody in such a hurry to see me as you were.

"Now the old man sat a-fiddling by the little cabin door,And the tune was pretty lively, and he played it o'er and o'er;And the stranger sat a-list'ning and a-wond'ring what to do,As he fiddled and he fiddled, but he never played it through."

Bo was very fond of music, and as Horatio drew from the strings the mellow strains of "The Arkansaw Traveller" he forgot that both he and the Bear were hungry....