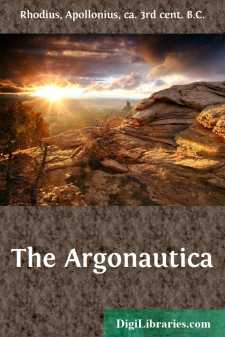 Much has been written about the chronology of Alexandrian literature and the famous Library, founded by Ptolemy Soter, but the dates of the chief writers are still matters of conjecture. The birth of Apollonius Rhodius is placed by scholars at various times between 296 and 260 B.C., while the year of his death is equally uncertain. In fact, we have very little information on the subject. There are two "lives" of Apollonius in the Scholia, both derived from an earlier one which is lost. From these we learn that he was of Alexandria by birth,[1] that he lived in the time of the Ptolemies, and was a pupil of Callimachus; that while still a youth he composed and recited in public his Argonautica, and that the poem was condemned, in consequence of which he retired to Rhodes; that there he revised his poem, recited it with great applause, and hence called himself a Rhodian. The second "life" adds: "Some say that he returned to Alexandria and again recited his poem with the utmost success, so that he was honoured with the libraries of the Museum[2] and was buried with Callimachus." The last sentence may be interpreted by the notice of Suidas, who informs us that Apollonius was a contemporary of Eratosthenes, Euphorion and Timarchus, in the time of Ptolemy Euergetes, and that he succeeded Eratosthenes in the headship of the Alexandrian Library. Suidas also informs us elsewhere that Aristophanes at the age of sixty-two succeeded Apollonius in this office. Many modern scholars deny the "bibliothecariate" of Apollonius for chronological reasons, and there is considerable difficulty about it. The date of Callimachus' Hymn to Apollo, which closes with some lines (105-113) that are admittedly an allusion to Apollonius, may be put with much probability at 248 or 247 B.C. Apollonius must at that date have been at least twenty years old. Eratosthenes died 196-193 B.C. This would make Apollonius seventy-two to seventy-five when he succeeded Eratosthenes. This is not impossible, it is true, but it is difficult. But the difficulty is taken away if we assume with Ritschl that Eratosthenes resigned his office some years before his death, which allows us to put the birth of Apollonius at about 280, and would solve other difficulties. For instance, if the Librarians were buried within the precincts, it would account for the burial of Apollonius next to Callimachus—Eratosthenes being still alive. However that may be, it is rather arbitrary to take away the "bibliothecariate" of Apollonius, which is clearly asserted by Suidas, on account of chronological calculations which are themselves uncertain. Moreover, it is more probable that the words following "some say" in the second "life" are a remnant of the original life than a conjectural addition, because the first "life" is evidently incomplete, nothing being said about the end of Apollonius' career.

[Footnote 1: "Or of Naucratis," according to Aelian and Athenaeus.]

The principal event in his life, so far as we know, was the quarrel with his master Callimachus, which was most probably the cause of his condemnation at Alexandria and departure to Rhodes....