The Arctic Prairies : a Canoe-Journey of 2,000 Miles in Search of the Caribou; Being the Account of a Voyage to the Region North of Aylemer Lake 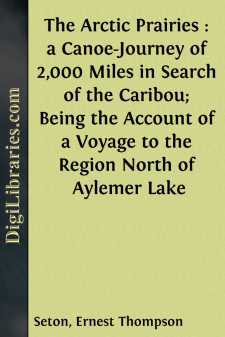 CHAPTER I DEPARTURE FOR THE NORTH

In 1907 I set out to journey by canoe down the Athabaska and adjoining waters to the sole remaining forest wilds—the far north-west of Canada—and the yet more desert Arctic Plains, where still, it was said, were to be seen the Caribou in their primitive condition.

My only companion was Edward A. Preble, of Washington, D. C., a trained naturalist,—an expert canoeist and traveller, and a man of three seasons' experience in the Hudson's Bay Territory and the Mackenzie Valley. While my chief object was to see the Caribou, and prove their continued abundance, I was prepared incidentally to gather natural-history material of all kinds, and to complete the shore line of the ambiguous lake called "Aylmer," as well as explore its sister, the better-known Clinton-Colden.

I went for my own pleasure at my own expense, and yet I could not persuade my Hudson's Bay Company friends that I was not sent by some government, museum or society for some secret purpose.

On the night of May 5 we left Winnipeg, and our observations began with the day at Brandon.

From that point westward to Regina we saw abundant evidence that last year had been a "rabbit year," that is, a year in which the ever-fluctuating population of Northern Hares (Snowshoe-rabbits or White-rabbits) had reached its maximum, for nine-tenths of the bushes in sight from the train had been barked at the snow level. But the fact that we saw not one Rabbit shows that "the plague" had appeared, had run its usual drastic course, and nearly exterminated the species in this particular region.

The case is simple. During the past winter, while the Antelope were gone southward, the Canadian Pacific Railway Company had fenced its track. In spring the migrants, returning, found themselves cut off from their summer feeding-grounds by those impassable barb-wires, and so were gathered against the barrier. One band of 8, at a stopping place, ran off when they saw passengers alighting, but at half a mile they turned, and again came up against the fence, showing how strong is the northward impulse.

Unless they learn some way of mastering the difficulty, it means extermination for the Antelope of the north Saskatchewan.

From Calgary we went by train to Edmonton. This is the point of leaving the railway, the beginning of hard travel, and here we waited a few days to gather together our various shipments of food and equipment, and to await notice that the river was open.

In the north the grand event of the year is the opening of the rivers....