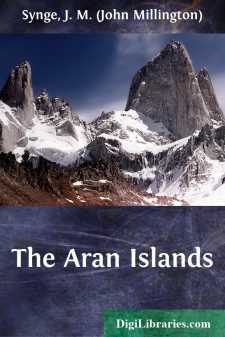 I am in Aranmor, sitting over a turf fire, listening to a murmur of Gaelic that is rising from a little public-house under my room.

The steamer which comes to Aran sails according to the tide, and it was six o'clock this morning when we left the quay of Galway in a dense shroud of mist.

A low line of shore was visible at first on the right between the movement of the waves and fog, but when we came further it was lost sight of, and nothing could be seen but the mist curling in the rigging, and a small circle of foam.

There were few passengers; a couple of men going out with young pigs tied loosely in sacking, three or four young girls who sat in the cabin with their heads completely twisted in their shawls, and a builder, on his way to repair the pier at Kilronan, who walked up and down and talked with me.

In about three hours Aran came in sight. A dreary rock appeared at first sloping up from the sea into the fog; then, as we drew nearer, a coast-guard station and the village.

A little later I was wandering out along the one good roadway of the island, looking over low walls on either side into small flat fields of naked rock. I have seen nothing so desolate. Grey floods of water were sweeping everywhere upon the limestone, making at limes a wild torrent of the road, which twined continually over low hills and cavities in the rock or passed between a few small fields of potatoes or grass hidden away in corners that had shelter. Whenever the cloud lifted I could see the edge of the sea below me on the right, and the naked ridge of the island above me on the other side. Occasionally I passed a lonely chapel or schoolhouse, or a line of stone pillars with crosses above them and inscriptions asking a prayer for the soul of the person they commemorated.

I met few people; but here and there a band of tall girls passed me on their way to Kilronan, and called out to me with humorous wonder, speaking English with a slight foreign intonation that differed a good deal from the brogue of Galway. The rain and cold seemed to have no influence on their vitality and as they hurried past me with eager laughter and great talking in Gaelic, they left the wet masses of rock more desolate than before.

A little after midday when I was coming back one old half-blind man spoke to me in Gaelic, but, in general, I was surprised at the abundance and fluency of the foreign tongue.

In the afternoon the rain continued, so I sat here in the inn looking out through the mist at a few men who were unlading hookers that had come in with turf from Connemara, and at the long-legged pigs that were playing in the surf. As the fishermen came in and out of the public-house underneath my room, I could hear through the broken panes that a number of them still used the Gaelic, though it seems to be falling out of use among the younger people of this village.

The old woman of the house had promised to get me a teacher of the language, and after a while I heard a shuffling on the stairs, and the old dark man I had spoken to in the morning groped his way into the room....