The Arabian Art of Taming and Training Wild and Vicious Horses 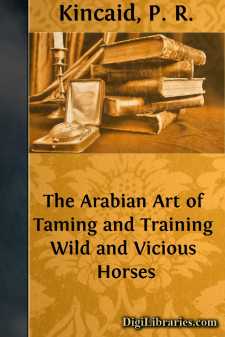 Founded on the Leading Characteristics of the Horse.

FIRST.—That he is so constituted by nature that he will not offer resistance to any demand made of him which he fully comprehends, if made in a way consistent with the laws of his nature.

SECOND.—That he has no consciousness of his strength beyond his experience, and can be handled according to our will, without force.

THIRD.—That we can, in compliance with the laws of his nature by which he examines all things new to him, take any object, however frightful, around, over or on him, that does not inflict pain, without causing him to fear.

To take these assertions in order, I will first give you some of the reasons why I think he is naturally obedient, and will not offer resistance to anything fully comprehended. The horse, though possessed of some faculties superior to man's being deficient in reasoning powers, has no knowledge of right or wrong, of free will and independent government, and knows not of any imposition practiced upon him, however unreasonable these impositions may be. Consequently, he cannot come to any decision what he should or should not do, because he has not the reasoning faculties of man to argue the justice of the thing demanded of him. If he had, taking into consideration his superior strength, he would be useless to man as a servant. Give him mind in proportion to his strength, and he will demand of us the green fields for an inheritance, where he will roam at leisure, denying the right of servitude at all. God has wisely formed his nature so that it can be operated upon by the knowledge of man according to the dictates of his will, and he might well be termed an unconscious, submissive servant. This truth we can see verified in every day's experience by the abuses practiced upon him. Any one who chooses to be so cruel, can mount the noble steed and run him 'till he drops with fatigue, or, as is often the case with more spirited, fall dead with the rider. If he had the power to reason, would he not vault and pitch his rider, rather than suffer him to run him to death? Or would he condescend to carry at all the vain imposter, who, with but equal intellect, was trying to impose on his equal rights and equally independent spirit? But happily for us, he has no consciousness of imposition, no thought of disobedience except by impulse caused by the violation of the law of nature. Consequently when disobedient it is the fault of man.

Then, we can but come to the conclusion, that if a horse is not taken in a way at variance with the law of his nature, he will do anything that he fully comprehends without making any offer of resistance.

Second. The fact of the horse being unconscious of the amount of his strength, can be proven to the satisfaction of any one. For instance, such remarks as these are common, and perhaps familiar to your recollection. One person says to another, "If that wild horse there was conscious of the amount of his strength, his owner could have no business with him in that vehicle; such light reins and harness, too; if he knew he could snap them asunder in a minute and be as free as the air we breathe;" and, "that horse yonder that is pawing and fretting to follow the company that is fast leaving him, if he knew his strength he would not remain long fastened to that hitching post so much against his will, by a strap that would no more resist his powerful weight and strength, than a cotton thread would bind a strong man." Yet these facts made common by every day occurrence, are not thought of as anything wonderful....