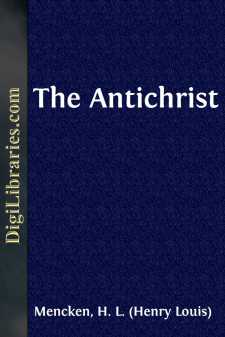 Save for his raucous, rhapsodical autobiography, “Ecce Homo,” “The Antichrist” is the last thing that Nietzsche ever wrote, and so it may be accepted as a statement of some of his most salient ideas in their final form. Notes for it had been accumulating for years and it was to have constituted the first volume of his long-projected magnum opus, “The Will to Power.” His full plan for this work, as originally drawn up, was as follows:

The first sketches for “The Will to Power” were made in 1884, soon after the publication of the first three parts of “Thus Spake Zarathustra,” and thereafter, for four years, Nietzsche piled up notes. They were written at all the places he visited on his endless travels in search of health—at Nice, at Venice, at Sils-Maria in the Engadine (for long his favourite resort), at Cannobio, at Zürich, at Genoa, at Chur, at Leipzig. Several times his work was interrupted by other books, first by “Beyond Good and Evil,” then by “The Genealogy of Morals” (written in twenty days), then by his Wagner pamphlets. Almost as often he changed his plan. Once he decided to expand “The Will to Power” to ten volumes, with “An Attempt at a New Interpretation of the World” as a general sub-title. Again he adopted the sub-title of “An Interpretation of All That Happens.” Finally, he hit upon “An Attempt at a Transvaluation of All Values,” and went back to four volumes, though with a number of changes in their arrangement. In September, 1888, he began actual work upon the first volume, and before the end of the month it was completed. The Summer had been one of almost hysterical creative activity. Since the middle of June he had written two other small books, “The Case of Wagner” and “The Twilight of the Idols,” and before the end of the year he was destined to write “Ecce Homo.” Some time during December his health began to fail rapidly, and soon after the New Year he was helpless. Thereafter he wrote no more.

The Wagner diatribe and “The Twilight of the Idols” were published immediately, but “The Antichrist” did not get into type until 1895. I suspect that the delay was due to the influence of the philosopher’s sister, Elisabeth Förster-Nietzsche, an intelligent and ardent but by no means uniformly judicious propagandist of his ideas. During his dark days of neglect and misunderstanding, when even family and friends kept aloof, Frau Förster-Nietzsche went with him farther than any other, but there were bounds beyond which she, also, hesitated to go, and those bounds were marked by crosses. One notes, in her biography of him—a useful but not always accurate work—an evident desire to purge him of the accusation of mocking at sacred things. He had, she says, great admiration for “the elevating effect of Christianity ... upon the weak and ailing,” and “a real liking for sincere, pious Christians,” and “a tender love for the Founder of Christianity.” All his wrath, she continues, was reserved for “St. Paul and his like,” who perverted the Beatitudes, which Christ intended for the lowly only, into a universal religion which made war upon aristocratic values. Here, obviously, one is addressed by an interpreter who cannot forget that she is the daughter of a Lutheran pastor and the grand-daughter of two others; a touch of conscience gets into her reading of “The Antichrist.” She even hints that the text may have been garbled, after the author’s collapse, by some more sinister heretic....