The Anti-Slavery Examiner, Part 4 of 4 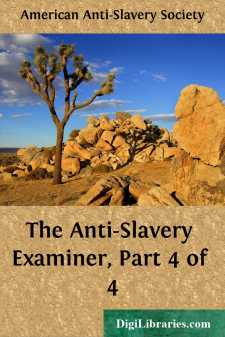 THE NEW TESTAMENT AGAINST SLAVERY.

"THE SON OF MAN IS COME TO SEEK AND TO SAVE THAT WHICH WAS LOST."

Is Jesus Christ in favor of American slavery? In 1776 THOMAS JEFFERSON, supported by a noble band of patriots and surrounded by the American people, opened his lips in the authoritative declaration: "We hold these truths to be SELF-EVIDENT, that all men are created equal; that they are endowed by their Creator with certain inalienable rights; that among these are life, LIBERTY, and the pursuit of happiness." And from the inmost heart of the multitudes around, and in a strong and clear voice, broke forth the unanimous and decisive answer: Amen—such truths we do indeed hold to be self-evident. And animated and sustained by a declaration, so inspiring and sublime, they rushed to arms, and as the result of agonizing efforts and dreadful sufferings, achieved under God the independence of their country. The great truth, whence they derived light and strength to assert and defend their rights, they made the foundation of their republic. And in the midst of this republic, must we prove, that He, who was the Truth, did not contradict "the truths" which He Himself; as their Creator, had made self-evident to mankind?

Is Jesus Christ in favor of American slavery? What, according to those laws which make it what it is, is American slavery? In the Statute-book of South Carolina thus it is written:[] "Slaves shall be deemed, held, taken, reputed and adjudged in law to be chattels personal in the hands of their owners and possessors, and their executors, administrators and assigns, to all intents, construction and purposes whatever." The very root of American slavery consists in the assumption, that law has reduced men to chattels. But this assumption is, and must be, a gross falsehood. Men and cattle are separated from each other by the Creator, immutably, eternally, and by an impassable gulf. To confound or identify men and cattle must be to lie most wantonly, impudently, and maliciously. And must we prove, that Jesus Christ is not in favor of palpable, monstrous falsehood?

Is Jesus Christ in favor of American slavery? How can a system, built upon a stout and impudent denial of self-evident truth—a system of treating men like cattle—operate? Thomas Jefferson shall answer. Hear him. "The whole commerce between master and slave is a perpetual exercise of the most boisterous passions; the most unremitting despotism on the one part, and degrading submission on the other. The parent storms, the child looks on, catches the lineaments of wrath, puts on the same airs in the circle of smaller slaves, gives loose to his worst passions, and thus nursed, educated, and daily exercised in tyranny, cannot but be stamped by it with odious peculiarities. The man must be a prodigy, who can retain his manners and morals undepraved by such circumstances."[] Such is the practical operation of a system, which puts men and cattle into the same family and treats them alike....