The Anti-Slavery Examiner, Part 3 of 4 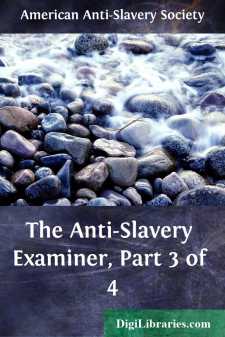 I feel it my duty to tell some things that I know about slavery, in order, if possible, to awaken more feeling at the North in behalf of the slave. The treatment of the slaves on the plantations where I had the greatest opportunity of getting knowledge, was not so bad as that on some neighboring estates, where the owners were noted for their cruelty. There were, however, other estates in the vicinity, where the treatment was better; the slaves were better clothed and fed, were not worked so hard, and more attention was paid to their quarters.

The scenes that I have witnessed are enough to harrow up the soul; but could the slave be permitted to tell the story of his sufferings, which no white man, not linked with slavery, is allowed to know, the land would vomit out the horrible system, slaveholders and all, if they would not unclinch their grasp upon their defenceless victims.

I spent eleven winters, between the years 1824 and 1835, in the state of North Carolina, mostly in the vicinity of Wilmington; and four out of the eleven on the estate of Mr. John Swan, five or six miles from that place. There were on his plantation about seventy slaves, male and female: some were married, and others lived together as man and wife, without even a mock ceremony. With their owners generally, it is a matter of indifference; the marriage of slaves not being recognized by the slave code. The slaves, however, think much of being married by a clergyman.

The cabins or huts of the slaves were small, and were built principally by the slaves themselves, as they could find time on Sundays and moonlight nights; they went into the swamps, cut the logs, backed or hauled them to the quarters, and put up their cabins.

When I first knew Mr. Swan's plantation, his overseer was a man who had been a Methodist minister. He treated the slaves with great cruelty. His reason for leaving the ministry and becoming an overseer, as I was informed, was this: his wife died, at which providence he was so enraged, that he swore he would not preach for the Lord another day. This man continued on the plantation about three years; at the close of which, on settlement of accounts, Mr. Swan owed him about $400, for which he turned him out a negro woman, and about twenty acres of land. He built a log hut, and took the woman to live with him; since which, I have been at his hut, and seen four or five mulatto children. He has been appointed justice of the peace, and his place as overseer was afterwards occupied by a Mr. Galloway.

It is customary in that part of the country, to let the hogs run in the woods. On one occasion a slave caught a pig about two months old, which he carried to his quarters. The overseer, getting information of the fact, went to the field where he was at work, and ordered him to come to him. The slave at once suspected it was something about the pig, and fearing punishment, dropped his hoe and ran for the woods. He had got but a few rods, when the overseer raised his gun, loaded with duck shot, and brought him down. It is a common practice for overseers to go into the field armed with a gun or pistols, and sometimes both. He was taken up by the slaves and carried to the plantation hospital, and the physician sent for. A physician was employed by the year to take care of the sick or wounded slaves. In about six weeks this slave got better, and was able to come out of the hospital. He came to the mill where I was at work, and asked me to examine his body, which I did, and counted twenty-six duck shot still remaining in his flesh, though the doctor had removed a number while he was laid up.

There was a slave on Mr. Swan's plantation, by the name of Harry, who, during the absence of his master, ran away and secreted himself is the woods. This the slaves sometimes do, when the master is absent for several weeks, to escape the cruel treatment of the overseer....