The Anti-Slavery Examiner, Part 2 of 4 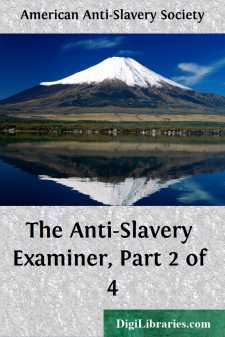 POWER OF CONGRESS OVER THE DISTRICT OF COLUMBIA.

A civilized community presupposes a government of law. If that government be a republic, its citizens are the sole sources, as well as the subjects of its power. Its constitution is their bill of directions to their own agents--a grant authorizing the exercise of certain powers, and prohibiting that of others. In the Constitution of the United States, whatever else may be obscure, the clause granting power to Congress over the Federal District may well defy misconstruction. Art. 1, Sec. 8, Clause 18: "The Congress shall have power to exercise exclusive legislation, in all cases whatsoever, over such District." Congress may make laws for the District "in all cases," not of all kinds. The grant respects the subjects of legislation, not the moral nature of the laws. The law-making power every where, is subject to moral restrictions, whether limited by constitutions or not. No legislature can authorize murder, nor make honesty penal, nor virtue a crime, nor exact impossibilities. In these and similar respects, the power of Congress is held in check by principles existing in the nature of things, not imposed by the Constitution, but presupposed and assumed by it. The power of Congress over the District is restricted only by those principles that limit ordinary legislation, and, in some respects, it has even wider scope.

In common with the legislatures of the States, Congress cannot constitutionally pass ex post facto laws in criminal cases, nor suspend the writ of habeas corpus, nor pass a bill of attainder, nor abridge the freedom of speech and of the press, nor invade the right of the people to be secure in their persons, houses, papers, and effects, nor enact laws respecting an establishment of religion. These are general limitations. Congress cannot do these things any where. The exact import, therefore, of the clause "in all cases whatsoever," is, on all subjects within the appropriate sphere of legislation. Some legislatures are restrained by constitutions from the exercise of powers strictly within the proper sphere of legislation. Congressional power over the District has no such restraint. It traverses the whole field of legitimate legislation. All the power which any legislature has within its own jurisdiction, Congress holds over the District of Columbia.

It has been asserted that the clause in question respects merely police regulations, and that its sole design was to enable Congress to protect itself against popular tumults. But if the framers of the Constitution aimed to provide for a single case only, why did they provide for "all cases whatsoever?" Besides, this clause was opposed in many of the state conventions, because the grant of power was not restricted to police regulations alone. In the Virginia Convention, George Mason, the father of the Virginia Constitution, said, "This clause gives an unlimited authority in every possible case within the District. He would willingly give them exclusive power as far as respected the police and good government of the place, but he would give them no more." Mr....