The Anti-Slavery Examiner, Part 1 of 4 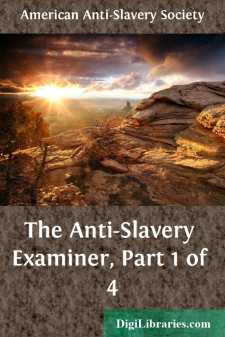 TO THEPEOPLE OF THE UNITED STATES;OR, TO SUCH AMERICANS AS VALUE THEIR RIGHTS, ANDDARE TO MAINTAIN THEM.

A crisis has arrived, in which rights the most important which civil society can acknowledge, and which have been acknowledged by our Constitution and laws, in terms the most explicit which language can afford, are set at nought by men, whom your favor has invested with a brief authority. By what standard is your liberty of conscience, of speech, and of the press, now measured? Is it by those glorious charters you have inherited from your fathers, and which your present rulers have called Heaven to witness, they would preserve inviolate? Alas! another standard has been devised, and if we would know what rights are conceded to us by our own servants, we must consult the COMPACT by which the South engages on certain conditions to give its trade and votes to Northern men. All rights not allowed by this compact, we now hold by sufferance, and our Governors and Legislatures avow their readiness to deprive us of them, whenever in their opinion, legislation on the subject shall be "necessary." This compact is not indeed published to the world, under the hands and seals of the contracting parties, but it is set forth in official messages,—in resolutions of the State and National Legislatures—in the proceedings of popular meetings, and in acts of lawless violence. The temples of the Almighty have been sacked, because the worshipers did not conform their consciences to the compact. Ministers of the gospel have been dragged as criminals from the altar to the bar, because they taught the people from the Bible, doctrines proscribed by the compact. Hundreds of free citizens, peaceably assembled to express their sentiments, have, because such an expression was forbidden by the compact, been forcibly dispersed, and the chief actor in this invasion on the freedom of speech, instead of being punished for a breach of the peace, was rewarded for his fidelity to the compact with an office of high trust and honor.

: See the Messages of the Governors of New-York and Connecticut, the resolutions of the New-York Legislature, and the bill introduced into the Legislature of Rhode Island.

: Samuel Beardsley, Esq. the leader of the Utica riot, was shortly afterwards appointed Attorney General of the state of New-York.

"The freedom of the press—the palladium of liberty," was once a household proverb. Now, a printing office is entered by ruffians, and its types scattered in the highway, because disobedient to the compact. A Grand Jury, sworn to "present all things truly as they come to their knowledge," refuse to indict the offenders; and a senator in Congress rises in his place, and appeals to the outrage in the printing office, and the conduct of the Grand Jury as evidence of the good faith with which the people of the state of New York were resolved to observe the compact.

: Office of the Utica Standard and Democrat newspaper.

The Executive Magistrate of the American Union, unmindful of his obligation to execute the laws for the equal benefit of his fellow citizens, has sanctioned a censorship of the press, by which papers incompatible with the compact are excluded from the southern mails, and he has officially advised Congress to do by law, although in violation of the Constitution, what he had himself virtually done already in despite of both. The invitation has indeed been rejected, but by the Senate of the United States only, after a portentous struggle—a struggle which distinctly exhibited the political conditions of the compact, as well as the fidelity with which those conditions are observed by a northern candidate for the Presidency. While in compliance with these conditions, a powerful minority in the Senate were forging fetters for the PRESS, the House of Representatives were employed in breaking down the right of PETITION....