The Andes and the Amazon Across the Continent of South America 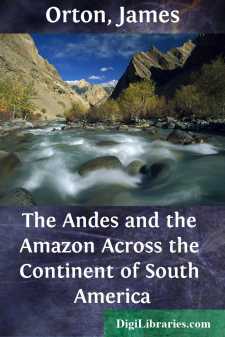 This volume is one result of a scientific expedition to the equatorial Andes and the river Amazon. The expedition was made under the auspices of the Smithsonian Institution, and consisted of the following gentlemen besides the writer: Colonel Staunton, of Ingham University, Leroy, N.Y.; F.S. Williams, Esq., of Albany, N.Y.; and Messrs. P.V. Myers and A. Bushnell, of Williams College. We sailed from New York July 1, 1867; and, after crossing the Isthmus of Panama and touching at Paita, Peru, our general route was from Guayaquil to Quito, over the Eastern Cordillera; thence over the Western Cordillera, and through the forest on foot to Napo; down the Rio Napo by canoe to Pebas, on the Marañon; and thence by steamer to Pará.

Nearly the entire region traversed by the expedition is strangely misrepresented by the most recent geographical works. On the Andes of Ecuador we have little besides the travels of Humboldt; on the Napo, nothing; while the Marañon is less known to North Americans than the Nile.

Many of the following pages first appeared in the New York Evening Post. The author has also published "Physical Observations on the Andes and the Amazon" and "Geological Notes on the Ecuadorian Andes" in the American Journal of Science, an article on the great earthquake of 1868 in the Rochester Democrat, and a paper On the Valley of the Amazon read before the American Association at Salem. These papers have been revised and extended, though the popular form has been retained. It has been the effort of the writer to present a condensed but faithful picture of the physical aspect, the resources, and the inhabitants of this vast country, which is destined to become an important field for commercial enterprise. For detailed descriptions of the collections in natural history, the scientific reader is referred to the various reports of the following gentlemen, to whom the specimens were committed by the Smithsonian Institution:

Many of the type specimens are deposited in the museums of the Smithsonian Institution, the Philadelphia Academy of Natural Science, the Boston Society of Natural History, the Peabody Academy of Science, and Vassar College; but the bulk of the collection was purchased by Ingham University, Leroy, New York.

The Map of Equatorial America was drawn with great care after original observations and the surveys of Humboldt and Wisse on the Andes, and of Azevedo, Castlenau, and Bates on the Amazon. The names of Indian tribes are in small capitals. Most of the illustrations are after photographs or drawings made on the ground, and can be relied upon. The portrait of Humboldt, which is for the first time presented to the public, was photographed from the original painting in the possession of Sr. Aguirre, Quito. Unlike the usual portrait—an old man, in Berlin—this presents him as a young man in Prussian uniform, traveling on the Andes.

We desire to express our grateful acknowledgments to the Smithsonian Institution, Hon. William H....