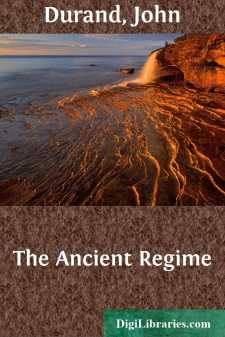 Why should we fetch Taine's work up from its dusty box in the basement of the national library? First of all because his realistic views of our human nature, of our civilization and of socialism as well as his dark premonitions of the 20th century were proven correct. Secondly because we may today with more accuracy call his work:

"The Origins of Popular Democracy and of Communism."

His lucid analysis of the current ideology remains as interesting or perhaps even more interesting than when it was written especially because we cannot accuse him of being part in our current political and ideological struggle.

Even though I found him wise, even though he confirmed my own impressions from a rich and varied life, even though I considered that our children and the people at large should benefit from his insights into the innermost recesses of the political Man, I still felt it would be best to find out why his work had been put on the index by the French and largely forgotten by the Anglo-Saxon world. So I consulted a contemporary French authority, Jean-François Revel who mentions Taine works in his book, "La Connaissance Inutile." (Paris 1988). Revel notes that a socialist historian, Alphonse Aulard methodically and dishonestly attacked "Les Origines..", and that Aulard was specially recruited by the University of Sorbonne for this purpose. Aulard pretended that Taine was a poor historian by finding a number of errors in Taine's work. This was done, says Revel, because the 'Left' came to see Taine's work as "a vile counter-revolutionary weapon." The French historian Augustin Cochin proved, however, that Aulard and not Taine had made the errors but by that time Taine had been defamed and his works removed from the shelves of the French universities.

Now Taine was not a professional historian. Perhaps this was as well since most professional historians, even when conscientious and accurate, rarely are in a position to be independent. They generally work for a university, for a national public or for the ministry of education and their books, once approved, may gain a considerable income once millions of pupils are compelled to acquire these.

Taine initially became famous, not as a professional historian but as a literary critic and journalist. His fame allowed him to sell his books and articles and make a comfortable living without cow-towing to any government or university. He wrote as he saw fit, truthfully, even though it might displease a number of powerful persons.

Taine did not pretend to be a regular historian, but rather someone enquiring into the history of Public Authorities and their supporters. Through his comments he appears not only as a decent person but also as a psychologist and seer. He describes mankind, as I know it from my life in institutions, at sea and abroad in a large international organization. He describes mankind as it was, as it was seen by Darwin in 'THE EXPRESSIONS OF EMOTIONS IN MAN AND ANIMALS. Taine described the human being as he was and is and had the courage to tell the French about themselves, their ancient rulers, and the men of the Revolution, even if it went against the favorable opinion so many of his countrymen had of this terrible period....