The Ancient Monuments of North and South America, 2nd ed. 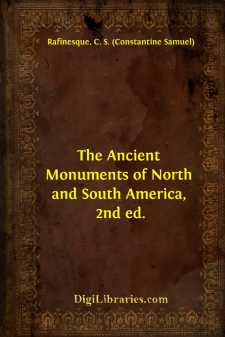 The feelings that lead some men to investigate remains of antiquity and search into their origin, dates and purposes, are similar to those actuating lofty minds, when not satisfied with the surface of things, they inquire into the source and origin of every thing accessible to human ken, and scrutinize or analize every tangible object. Such feelings lead us to trace events and principles, to ascend rivers to their sources, to climb the rugged sides of mountains and reach their lofty summits, to plough the waves and dive into the sea, or even soar into the air, to scan and measure the heavenly bodies, and at last to lift our eyes and souls to the Supreme Being, the source of all.—Applied to mankind the same feelings invite us to seek for the origin of arts and sciences, the steps of civilization on earth, the rise of nations, states and empires, tracing their cradles, dispersions and migrations by the dim records of traditional tales, or the more certain monumental evidence of human structures.

This last evidence is but a branch of the archeological science, embracing besides the study of documents, records, medals, coins, inscriptions, implements, &c., buried in the earth or hidden in recesses: while the ruins of cities, palaces and temples, altars and graves, pyramids and towers, walls and roads, sculptures and idols—reveal to our inquiries not only the existence of their devisers and framers at their locations, but give us a view of their civilization, religions, manners and abilities.

If the annals of the Greeks and Romans had been lost, as have been those of Egypt, of Assyria and many other early empires, we should still have in the ruins and monuments of Italy, and Greece, complete evidence of the existence of those nations, their location, power and skill; nay, even of the extent of their dominion by their colonial monuments, scattered from Syria to Spain, from Lybia to Britain. If the British annals should ever be lost hereafter by neglect or revolutions, the ruins of dwellings, churches, monuments &c., built in the British style, will reveal the existence or preserve the memory of the wide extent of British power by colonies sent from North America to Guyana, from Hindustan to Ceylon, South Africa and Australia.

And thus it is in both Americas where many nations and empires have dwelt and passed away, risen and fallen by turns, leaving few or no records, except the traces of their existence, and widely spread colonies by the ruins of their cities and monuments, standing yet as silent witnesses of past dominion and great power. It is only of late that they have begun to deserve the attention of learned men and historians—what had been stated by Ulloa, Humboldt, Juarros, Delrio, &c., of some of them, chiefly found in the Spanish part of America, as well as the scattered accounts of the many fragments found in North America, from the lakes of Canada to Louisiana, although confined to a few places or widely remote localities, have begun to excite the curiosity of all inquiring men, and are soon likely to deserve as much interest as the famed ruins of Palmyra and Thebes, Babylon and Persepolis; when the future historians of America shall make known the wonderful and astonishing results that they have suggested, or will soon unfold, particularly when accurately surveyed and explored, drawn and engraved; instead of being hidden and veiled, or hardly noticed by the detractors of the Americans, the false historians of the school of Depaw and Robertson, who have perverted or omitted the most striking features of American history.

The most erroneous conceptions prevail as yet concerning them, and the most rude or absurd ideas are entertained in our country of their objects and nature....