The Ancient Life History of the Earth A Comprehensive Outline of the Principles and Leading Facts of Pal?ontological Science 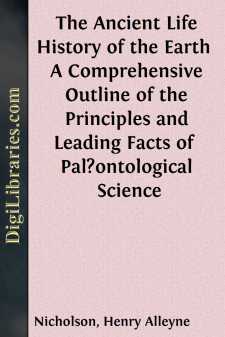 THE LAWS OF GEOLOGICAL ACTION.

Under the general title of "Geology" are usually included at least two distinct branches of inquiry, allied to one another in the closest manner, and yet so distinct as to be largely capable of separate study. Geology,[1] in its strict sense, is the science which is concerned with the investigation of the materials which compose the earth, the methods in which those materials have been arranged, and the causes and modes of origin of these arrangements. In this limited aspect, Geology is nothing more than the Physical Geography of the past, just as Physical Geography is the Geology of to-day; and though it has to call in the aid of Physics, Astronomy, Mineralogy, Chemistry, and other allies more remote, it is in itself a perfectly distinct and individual study. One has, however, only to cross the threshold of Geology to discover that the field and scope of the science cannot be thus rigidly limited to purely physical problems. The study of the physical development of the earth throughout past ages brings us at once in contact with the forms of animal and vegetable life which peopled its surface in bygone epochs, and it is found impossible adequately to comprehend Page 2 the former, unless we possess some knowledge of the latter. However great its physical advances may be, Geology remains imperfect till it is wedded with Palæontology,[2] a study which essentially belongs to the vast complex of the Biological Sciences, but at the same time has its strictly geological side. Dealing, as it does, wholly with the consideration of such living beings as do not belong exclusively to the present order of things, Palæontology is, in reality, a branch of Natural History, and may be regarded as substantially the Zoology and Botany of the past. It is the ancient life-history of the earth, as revealed to us by the labours of palæontologists, with which we have mainly to do here; but before entering upon this, there are some general questions, affecting Geology and Palæontology alike, which may be very briefly discussed.

The working geologist, dealing in the main with purely physical problems, has for his object to determine the material structure of the earth, and to investigate, as far as may be, the long chain of causes of which that structure is the ultimate result. No wider or more extended field of inquiry could be found; but philosophical geology is not content with this. At all the confines of his science, the transcendental geologist finds himself confronted with some of the most stupendous problems which have ever engaged the restless intellect of humanity. The origin and primæval constitution of the terrestrial globe, the laws of geologic action through long ages of vicissitude and development, the origin of life, the nature and source of the myriad complexities of living beings, the advent of man, possibly even the future history of the earth, are amongst the questions with which the geologist has to grapple in his higher capacity....