The Ancient Church Its History, Doctrine, Worship, and Constitution 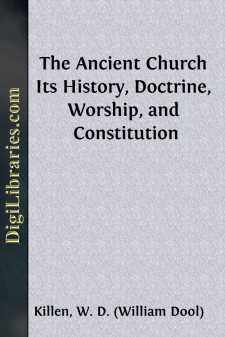 CHAPTER I. THE ROMAN EMPIRE AT THE TIME OF THE BIRTH OF CHRIST.

Upwards of a quarter of a century before the Birth of Christ, the grandnephew of Julius Caesar had become sole master of the Roman world. Never, perhaps, at any former period, had so many human beings acknowledged the authority of a single potentate. Some of the most powerful monarchies at present in Europe extend over only a fraction of the territory which Augustus governed: the Atlantic on the west, the Euphrates on the east, the Danube and the Rhine on the north, and the deserts of Africa on the south, were the boundaries of his empire.

We do not adequately estimate the rank of Augustus among contemporary sovereigns, when we consider merely the superficial extent of the countries placed within the range of his jurisdiction. His subjects probably formed more than one-third of the entire population of the globe, and amounted to about one hundred millions of souls.[Endnote 3:1] His empire embraced within its immense circumference the best cultivated and the most civilised portions of the earth. The remains of its populous cities, its great fortresses, its extensive aqueducts, and its stately temples, may still be pointed out as the memorials of its grandeur. The capital was connected with the most distant provinces by carefully constructed roads, along which the legions could march with ease and promptitude, either to quell an internal insurrection, or to encounter an invading enemy. And the military resources at the command of Augustus were abundantly sufficient to maintain obedience among the myriads whom he governed. After the victory of Actium he was at the head of upwards of forty veteran legions; and though some of these had been decimated by war, yet, when recruited, and furnished with their full complement of auxiliaries, they constituted a force of little less than half a million of soldiers.

The arts of peace now nourished under the sunshine of imperial patronage. Augustus could boast, towards the end of his reign, that he had converted Rome from a city of brick huts into a city of marble palaces. The wealth of the nobility was enormous; and, excited by the example of the Emperor and his friend Agrippa, they erected and decorated mansions in a style of regal magnificence. The taste cherished in the capital was soon widely diffused; and, in a comparatively short period, many new and gorgeous temples and cities appeared throughout the empire. Herod the Great expended vast sums on architectural improvements. The Temple of Jerusalem, rebuilt under his administration, was one of the wonders of the world.

The century terminating with the death of Augustus claims an undisputed pre-eminence in the history of Roman eloquence and literature. Cicero, the prince of Latin orators, now delivered those addresses which perpetuate his fame; Sallust and Livy produced works which are still regarded as models of historic composition; Horace, Virgil, and others, acquired celebrity as gifted and accomplished poets....