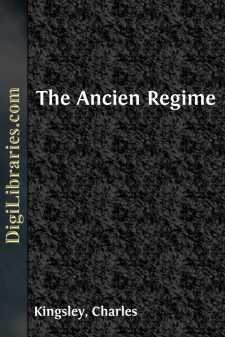 The rules of the Royal Institution forbid (and wisely) religious or political controversy.  It was therefore impossible for me in these Lectures, to say much which had to be said, in drawing a just and complete picture of the Ancien Régime in France.  The passages inserted between brackets, which bear on religious matters, were accordingly not spoken at the Royal Institution.

But more.  It was impossible for me in these Lectures, to bring forward as fully as I could have wished, the contrast between the continental nations and England, whether now, or during the eighteenth century.  But that contrast cannot be too carefully studied at the present moment.  In proportion as it is seen and understood, will the fear of revolution (if such exists) die out among the wealthier classes; and the wish for it (if such exists) among the poorer; and a large extension of the suffrage will be looked on as—what it actually is—a safe and harmless concession to the wishes—and, as I hold, to the just rights—of large portion of the British nation.

There exists in Britain now, as far as I can see, no one of those evils which brought about the French Revolution.  There is no widespread misery, and therefore no widespread discontent, among the classes who live by hand-labour.  The legislation of the last generation has been steadily in favour of the poor, as against the rich; and it is even more true now than it was in 1789, that—as Arthur Young told the French mob which stopped his carriage—the rich pay many taxes (over and above the poor-rates, a direct tax on the capitalist in favour of the labourer) more than are paid by the poor.  “In England” (says M. de Tocqueville of even the eighteenth century) “the poor man enjoyed the privilege of exemption from taxation; in France, the rich.”  Equality before the law is as well-nigh complete as it can be, where some are rich and others poor; and the only privileged class, it sometimes seems to me, is the pauper, who has neither the responsibility of self-government, nor the toil of self-support.

A minority of malcontents, some justly, some unjustly, angry with the present state of things, will always exist in this world.  But a majority of malcontents we shall never have, as long as the workmen are allowed to keep untouched and unthreatened their rights of free speech, free public meeting, free combination for all purposes which do not provoke a breach of the peace.  There may be (and probably are) to be found in London and the large towns, some of those revolutionary propagandists who have terrified and tormented continental statesmen since the year 1815.  But they are far fewer in number than in 1848; far fewer still (I believe) than in 1831; and their habits, notions, temper, whole mental organisation, is so utterly alien to that of the average Englishman, that it is only the sense of wrong which can make him take counsel with them, or make common cause with them.  Meanwhile, every man who is admitted to a vote, is one more person withdrawn from the temptation to disloyalty, and enlisted in maintaining the powers that be—when they are in the wrong, as well as when they are in the right.  For every Englishman is by his nature conservative; slow to form an opinion; cautious in putting it into effect; patient under evils which seem irremediable; persevering in abolishing such as seem remediable; and then only too ready to acquiesce in the earliest practical result; to “rest and be thankful.”  His faults, as well as his virtues, make him anti-revolutionary.  He is generally too dull to take in a great idea; and if he does take it in, often too selfish to apply it to any interest save his own.  But now and then, when the sense of actual injury forces upon him a great idea, like that of Free-trade or of Parliamentary Reform, he is indomitable, however slow and patient, in translating his thought into fact: and they will not be wise statesmen who resist his dogged determination.  If at this moment he demands an extension of the suffrage eagerly and even violently, the wise statesman will give at once, gracefully and generously, what the Englishman will certainly obtain one day, if he has set his mind upon it.  If, on the other hand, he asks for it calmly, then the wise statesman (instead of mistaking English reticence for apathy) will listen to his wishes all the more readily; seeing in the moderation of the demand, the best possible guarantee for moderation in the use of the thing demanded....