The Analysis of Mind 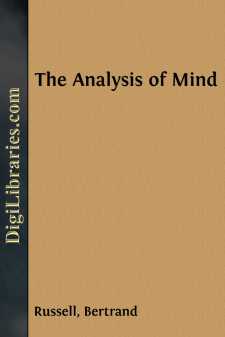 An admirable statement of the aims of the Library of Philosophy was provided by the first editor, the late Professor J. H. Muirhead, in his description of the original programme printed in Erdmann's History of Philosophy under the date 1890. This was slightly modified in subsequent volumes to take the form of the following statement:

"The Muirhead Library of Philosophy was designed as a contribution to the History of Modern Philosophy under the heads: first of Different Schools of Thought—Sensationalist, Realist, Idealist, Intuitivist; secondly of different Subjects—Psychology, Ethics, Aesthetics, Political Philosophy, Theology. While much had been done in England in tracing the course of evolution in nature, history, economics, morals and religion, little had been done in tracing the development of thought on these subjects. Yet 'the evolution of opinion is part of the whole evolution'.

"By the co-operation of different writers in carrying out this plan it was hoped that a thoroughness and completeness of treatment, otherwise unattainable, might be secured. It was believed also that from writers mainly British and American fuller consideration of English Philosophy than it had hitherto received might be looked for. In the earlier series of books containing, among others, Bosanquet's "History of Aesthetic," Pfleiderer's "Rational Theology since Kant," Albee's "History of English Utilitarianism," Bonar's "Philosophy and Political Economy," Brett's "History of Psychology," Ritchie's "Natural Rights," these objects were to a large extent effected.

"In the meantime original work of a high order was being produced both in England and America by such writers as Bradley, Stout, Bertrand Russell, Baldwin, Urban, Montague, and others, and a new interest in foreign works, German, French and Italian, which had either become classical or were attracting public attention, had developed. The scope of the Library thus became extended into something more international, and it is entering on the fifth decade of its existence in the hope that it may contribute to that mutual understanding between countries which is so pressing a need of the present time."

The need which Professor Muirhead stressed is no less pressing to-day, and few will deny that philosophy has much to do with enabling us to meet it, although no one, least of all Muirhead himself, would regard that as the sole, or even the main, object of philosophy. As Professor Muirhead continues to lend the distinction of his name to the Library of Philosophy it seemed not inappropriate to allow him to recall us to these aims in his own words. The emphasis on the history of thought also seemed to me very timely; and the number of important works promised for the Library in the very near future augur well for the continued fulfilment, in this and other ways, of the expectations of the original editor.

This book has grown out of an attempt to harmonize two different tendencies, one in psychology, the other in physics, with both of which I find myself in sympathy, although at first sight they might seem inconsistent....