The Americanization of Edward Bok : the autobiography of a Dutch boy fifty years after 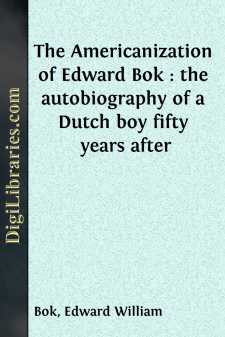 Along an island in the North Sea, five miles from the Dutch Coast, stretches a dangerous ledge of rocks that has proved the graveyard of many a vessel sailing that turbulent sea. On this island once lived a group of men who, as each vessel was wrecked, looted the vessel and murdered those of the crew who reached shore. The government of the Netherlands decided to exterminate the island pirates, and for the job King William selected a young lawyer at The Hague.

"I want you to clean up that island," was the royal order. It was a formidable job for a young man of twenty-odd years. By royal proclamation he was made mayor of the island, and within a year, a court of law being established, the young attorney was appointed judge; and in that dual capacity he "cleaned up" the island.

The young man now decided to settle on the island, and began to look around for a home. It was a grim place, barren of tree or living green of any kind; it was as if a man had been exiled to Siberia. Still, argued the young mayor, an ugly place is ugly only because it is not beautiful. And beautiful he determined this island should be.

One day the young mayor-judge called together his council. "We must have trees," he said; "we can make this island a spot of beauty if we will!" But the practical seafaring men demurred; the little money they had was needed for matters far more urgent than trees.

"Very well," was the mayor's decision—and little they guessed what the words were destined to mean—"I will do it myself." And that year he planted one hundred trees, the first the island had ever seen.

"Too cold," said the islanders; "the severe north winds and storms will kill them all."

"Then I will plant more," said the unperturbed mayor. And for the fifty years that he lived on the island he did so. He planted trees each year; and, moreover, he had deeded to the island government land which he turned into public squares and parks, and where each spring he set out shrubs and plants.

Moistened by the salt mist the trees did not wither, but grew prodigiously. In all that expanse of turbulent sea—and only those who have seen the North Sea in a storm know how turbulent it can be—there was not a foot of ground on which the birds, storm-driven across the water-waste, could rest in their flight. Hundreds of dead birds often covered the surface of the sea. Then one day the trees had grown tall enough to look over the sea, and, spent and driven, the first birds came and rested in their leafy shelter. And others came and found protection, and gave their gratitude vent in song. Within a few years so many birds had discovered the trees in this new island home that they attracted the attention not only of the native islanders but also of the people on the shore five miles distant, and the island became famous as the home of the rarest and most beautiful birds. So grateful were the birds for their resting-place that they chose one end of the island as a special spot for the laying of their eggs and the raising of their young, and they fairly peopled it....