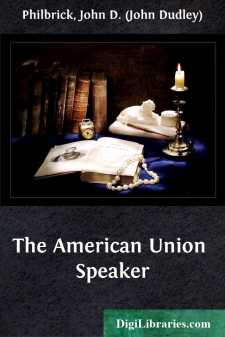 The design of this book is twofold,—to meet the present demand for new selections suited to the spirit of the hour, and also to furnish a choice collection of standard pieces for elocutionary exercises on which time has set its lasting seal. In the execution of this design no pains have been spared in selecting and preparing the best pieces, both new and old.

The extracts from recent productions, numbering about one hundred, by more than fifty different authors, are now for the first time presented in a Speaker. They are for the most part the eloquent utterances of our best orators and poets, inspired by the present national crisis, and are therefore "all compact of the passing hour," breathing "the fine sweet spirit of nationality,—the nationality of America." They give expression to the emotions excited, the hopes inspired, and the duties imposed by this stormy and perilous period. They afford brilliant illustrations of the statesmanship of the crisis. Sumner exposes the origin and mainspring of the rebellion, Douglass strips off its pretext, Everett paints its crime, Boutwell boldly proclaims its remedy in emancipation, and Banks pronounces a benediction on the first act of reconstruction on the solid basis of freedom to all. They furnish also an epitome of the convict of arms. Bryant utters the rallying cry to the people, Whittier responds in the united voice of the North, Holmes sounds the grand charge, Pierpont gives the command "Forward!" Longfellow and Boker immortalize the unconquerable heroism of our braves on sea and land, and Andrew and Beecher speak in tender accents the gratitude of loyal hearts to our fallen heroes.

These new pieces will for a time receive the preference over old ones, and some of them will survive the period which called them forth. But to insure for the work, if possible, a permanent value as a Standard Speaker for students of common schools, higher seminaries and colleges, the greater part of the selections, nearly three hundred in number, have been chosen from those of acknowledged excellence, and of unquestionable merit as exercises for recitation and declamation. This department comprises every variety of style necessary in elocutionary culture.

Another important feature of the collection is the introduction of those masterpieces of oratory—long excluded from books of this class, though now rendered appropriate by the new phase of public opinion,which advocate the inalienable rights of man, and denounce the crime of human bondage. Aware of the deep and lasting power which pieces used for declamation exert in moulding the ideas and opinions of the young, it has been my aim to admit only such productions as inculcate the noblest and purest sentiments, teaching patriotism, loyalty, and justice, and bring the youthful heart with ambition to be useful, and with heroic devotion to duty.

The text of the extracts has been made to conform to that of the most authentic editions of the works of their authors. Some pieces which have heretofore been presented in a mutilated form, are here restored to their original completeness. Where compression or abridgment has been necessary, it has been executed with caution, and with strict regard to the sentiments and ideas of the authors. Fully convinced that elaborate treatises on elocution more appropriately form separate publications, nothing of the kind has been included in this volume....