The American Spirit in Literature : a chronicle of great interpreters 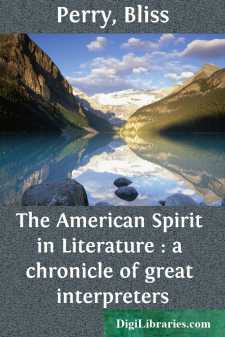 CHAPTER I. THE PIONEERS

The United States of America has been from the beginning in a perpetual change. The physical and mental restlessness of the American and the temporary nature of many of his arrangements are largely due to the experimental character of the exploration and development of this continent. The new energies released by the settlement of the colonies were indeed guided by stern determination, wise forethought, and inventive skill; but no one has ever really known the outcome of the experiment. It is a story of faith, of

Effort, and expectation, and desire,And something evermore about to be.

An Alexander Hamilton may urge with passionate force the adoption of the Constitution, without any firm conviction as to its permanence. The most clear-sighted American of the Civil War period recognized this element of uncertainty in our American adventure when he declared: "We are now testing whether this nation, or any nation so conceived and so dedicated, can long endure." More than fifty years have passed since that war rearmed the binding force of the Constitution and apparently sealed the perpetuity of the Union. Yet the gigantic economic and social changes now in progress are serving to show that the United States has its full share of the anxieties which beset all human institutions in this daily altering world.

"We are but strangers in an inn, but passengers in a ship," said Roger Williams. This sense of the transiency of human effort, the perishable nature of human institutions, was quick in the consciousness of the gentleman adventurers and sober Puritan citizens who emigrated from England to the New World. It had been a familiar note in the poetry of that Elizabethan period which had followed with such breathless interest the exploration of America. It was a conception which could be shared alike by a saint like John Cotton or a soldier of fortune like John Smith. Men are tent-dwellers. Today they settle here, and tomorrow they have struck camp and are gone. We are strangers and sojourners, as all our fathers were.

This instinct of the camper has stamped itself upon American life and thought. Venturesomeness, physical and moral daring, resourcefulness in emergencies, indifference to negligible details, wastefulness of materials, boundless hope and confidence in the morrow, are characteristics of the American. It is scarcely an exaggeration to say that the "good American" has been he who has most resembled a good camper. He has had robust health—unless or until he has abused it,—a tolerant disposition, and an ability to apply his fingers or his brain to many unrelated and unexpected tasks. He is disposed to blaze his own trail. He has a touch of prodigality, and, withal, a knack of keeping his tent or his affairs in better order than they seem. Above all, he has been ever ready to break camp when he feels the impulse to wander. He likes to be "foot-loose." If he does not build his roads as solidly as the Roman roads were built, nor his houses like the English houses, it is because he feels that he is here today and gone tomorrow....