The American Cyclops, the Hero of New Orleans, and Spoiler of Silver Spoons 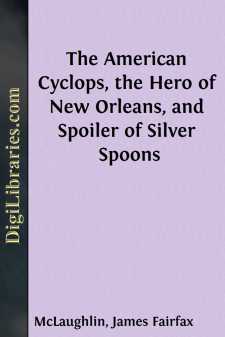 HE following little illustrated effusion is offered to the public, in the hope that it may not prove altogether uninteresting, or entirely inappropriate to the times. The famous pre-historic story of Ulysses and Polyphemus has received its counterpart in the case of two well-known personages of our own age and country. Ulysses of old contrived, with a burning stake, to put out the glaring eye of Polyphemus, the man-eating Cyclops, and thereby to abridge his power for cannibal indulgence; while our modern Ulysses, perhaps, mindful of his classical prototype, is content to leave the new Polyphemus safely "bottled-up" under the hermetical seal of the saucy Rebel Beauregard. Although the second Cyclops is yet [Pg 4] alive, and still possesses the visual organ in a squinting degree, a regard for impartial history compels us to add, that the sword which leapt from its scabbard in front of Fort Fisher, has fallen from the grasp of the "bottled" chieftain, whether from an invincible repugnance to warlike deeds, like that which pervaded the valiant soul of the renowned Falstaff, or because an axe on the public grindstone is a more congenial weapon in the itching palm of a Knight of Spoons, has not yet been determined with absolute precision.

The warrior Ulysses, like his namesake of Ithaca, however widely opinion may militate upon his other qualifications, certainly deserves the everlasting gratitude of a spoon-desolated country for the strategy displayed in tearing off the plumes of the American Polyphemus, and fixing that precious flower of knighthood among the "bottled" curiosities of natural history.

Progressive age! for contemplation's eye,Thy checker'd scenes a glorious field supply;Time was when Mercury waved the potent wand,And Nature brightened in the artist's hand,—When mind's dominion round the world was thrown,Before usurping Mammon seized the throne.Aspiring genius, chill thy noble rage,For baser uses rule our iron age;Drive the hard bargain, mart for sordid gain,And where it will not win, hold honor vain;

Picture 2."He wakes a patriot, presto, he is cladAs Fallstaff for the battle—raving mad." .

To lofty subjects bring the narrow view,Shift with each scene, and principle eschew.Are these the elements of man's success?Go where the busy throng all onward press;Ay, there they flourish and will long remain,Till virtue purge the haunts where vice doth reign.Not to the few the moral taint's confined,But in its boundless range infects mankind;'Twere idle to upbraid the good old plea—Might governs all, the rest were mock'ry.The plumpest fly a sparrow's meal provides—The heartless bird its agony derides:"Nay," quoth relentless Sparrow, "you must die,For you, weak thing, are not so strong as I."A Hawk surprised him at his dainty meal,In vain the Sparrow gasped his last appeal;

Picture 4."He blew a warlike trumpAnd marched to conquest—conquest of a pump.".

When distant ages rise to view our times,Whate'er betide our silv'ry flowing rhymes,The brave we sing—Bœotian of the EastWill still survive to spread the mimic feast.'Tis said in fables that Silenus oldTo Midas lent the fatal gift of gold;But Terminus, the god of rogues, has giv'nOur hero gold unbless'd of man or heav'n.'Mid all the tyrants of our age and clime,He stands alone in infamy and crime;Not e'en Thersites of the cunning tribe,Gloried in guile like him we now describe....