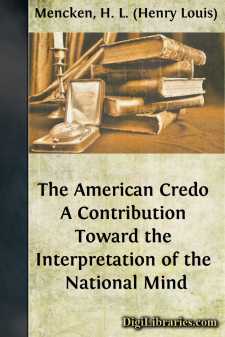 The superficial, no doubt, will mistake this little book for a somewhat laborious attempt at jocosity. Because, incidentally to its main purpose, it unveils occasional ideas of so inordinate an erroneousness that they verge upon the ludicrous, it will be set down a piece of spoofing, and perhaps denounced as in bad taste. But all the while that main purpose will remain clear enough to the judicious. It is, in brief, the purpose of clarifying the current exchange of rhetorical gas bombs upon the subject of American ideals and the American character, so copious, so cocksure and withal so ill-informed and inconclusive, by putting into plain propositions some of the notions that lie at the heart of those ideals and enter into the very substance of that character. "For as he thinketh in his heart," said Solomon, "so is he." It is a saying, obviously, that one may easily fill with fantastic meanings, as the prevailing gabble of the mental healers, New Thoughters, efficiency engineers, professors of scientific salesmanship and other such mountebanks demonstrates, but nevertheless it is one grounded, at bottom, upon an indubitable fact. Deep down in every man there is a body of congenital attitudes, a corpus of ineradicable doctrines and ways of thinking, that determines his reactions to his ideational environment as surely as his physical activity is determined by the length of his tibiæ and the capacity of his lungs. These primary attitudes, in fact, constitute the essential man. It is by recognition of them that one arrives at an accurate understanding of his place and function as a member of human society; it is by a shrewd reckoning and balancing of them, one against another, that one forecasts his probable behaviour in the face of unaccustomed stimuli.

All the arts and sciences that have to do with the management of men in the mass are founded upon a proficient practice of that sort of reckoning. The practical politician, as every connoisseur of ochlocracy knows, is not a man who seeks to inoculate the innumerable caravan of voters with new ideas; he is a man who seeks to search out and prick into energy the basic ideas that are already in them, and to turn the resultant effervescence of emotion to his own uses. And so with the religious teacher, the social and economic reformer, and every other variety of popular educator, down to and including the humblest press-agent of a fifth assistant Secretary of State, moving-picture actor, or Y.M.C.A. boob-squeezing committee. Such adept professors of conviction and enthusiasm, in the true sense, never actually teach anything new; all they do is to give new forms to beliefs already in being, to arrange the bits of glass, onyx, horn, ivory, porphyry and corundum in the mental kaleidoscope of the populace into novel permutations. To change the figure, they may give the medulla oblongata, the cerebral organ of the great masses of simple men, a powerful diuretic or emetic, but they seldom, if ever, add anything to its primary supply of fats, proteids and carbohydrates.

One speaks of the great masses of simple men, and it is of them, of course, that the ensuing treatise chiefly has to say....