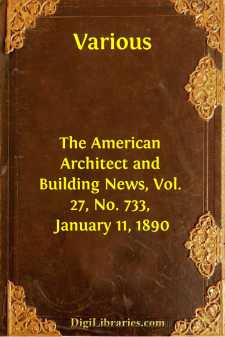 The term Civil and Domestic Architecture includes all public and private edifices, that is to say: honorary monuments, such as triumphal arches and tombs; buildings for the instruction of the public, such as museums, libraries and schools; houses for public amusements, as theatres, amphitheatres and circuses; structures for public service, as city-halls, court-houses, prisons, hospitals, thermæ, markets, warehouses, slaughter-houses, railway-stations, light-houses, bridges and aqueducts; finally, private dwellings, as palaces, mansions, city and country residences, châteaux and villas.

Memorial to the Heroes of the Franco Prussian War, Berlin.

The first care of all social organizations, at their inception, must have been to provide shelter against inclement weather. In primitive times society was composed of shepherds, or agriculturists, or hunters, and it is presumable that each of these groups adopted a shelter suited to its nomadic or sedentary tastes. For this reason to shepherds is attributed the invention of the tent, a portable habitation which they could take with them from valley to valley, wherever they led their flocks to pasture; agriculturists fixed to the soil which they tilled, dwelling in the plains and along the river banks, must have found the hut better adapted to their wants, while the hunters, stealing through the forests, ambushed in the mountains, or stationed on the seashore, naturally took safety in caves, or dug holes for themselves in the earth, or hollowed out grottos in the rocks.

An imitation of the tent is found later on in the form of the Chinese and Japanese structures; the principle of the cave appears developed in the subterranean dwellings of the people of India and Nubia; while the hut is the point of departure for all Greek and Roman architecture.

As soon as man had contrived a shelter for himself, before considering improvements that might be made in it, he turned his thoughts toward the divine being of his worship, and the first steps in art were taken in the monuments which he raised to his gods. Then, confounding kings with deities, he reared palaces like unto temples. But civil architecture, properly so called, came into existence only with an already advanced state of civilization, when cities were forming and peoples were organizing. After having satisfied the demands of the moral nature, after having erected temples to their gods and palaces to their kings, the people began to group together and surround themselves with fortifications. Next the material needs of society made themselves felt; aqueducts were constructed to supply water; bridges established communication between the opposite banks of streams; dikes confined the rivers within certain bounds; streets were laid out along which houses were built in orderly fashion, public squares were marked off where the products of industry could be exchanged, where justice was dispensed and where the great affairs of State were treated; then came mental and physical demands, a felt need for the training of body and mind, and out of this want grew theatres, stadia, gymnasia and thermæ....