The Alleged Haunting of B-- House 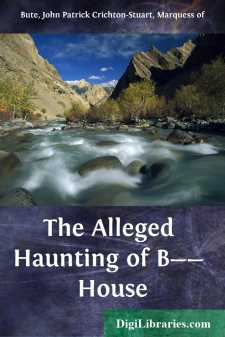 THE ALLEGED HAUNTINGOF B—— HOUSE

It was in 1892 that Lord Bute first heard of the matter. It was not, as stated by The Times correspondent in that journal for June 8, 1897, in or from London, but at Falkland, in Fifeshire, and in the following manner:—

There is no public chapel at Falkland, and the private chapel in the house is attended by a variety of priests, who usually come only from Saturday to Monday. Lord Bute's diary for the second week in August 1892 contains the following entries:—

"Sunday, August 7th.—In afternoon with Father H—— and John [Lord Dumfries] to Palace, and then with him to the Gruoch's Den. He gives us a long account of the psychical disturbances at B——; noises between his bed and the ceiling, like continuous explosion of petards, so that he could not hear himself speak, &c. &c.

"[Mr. Huggins afterwards recommended the use of a phonograph for these noises, in order to ascertain absolutely whether they are objective or subjective, and I wrote so to S—— of B——.]

"Sunday, August 14th.—In afternoon with the children, &c., to the Palace, leaving Mr. Huggins as much as possible alone with Father H—— (both being with us), in order to interrogate him about the psychical noises he heard recently at B——, when there, to give a Retreat to some nuns.

Lord Bute recalls that Father H—— told him that he had been at B—— for the purpose of giving a Retreat [a series of sermons and meditations] to some nuns, who were charitably allowed by Mr. S—— to take a sort of holiday, at a house called B—— Cottage, which had been originally built and occupied by the late Major S——, when he first took up his residence at B——, which at the time was let.

Father H—— told Lord Bute that in consequence of the disturbance his room had been several times changed, and he expressed surprise that the sounds did not appear to be heard by anybody except himself. He also said that he had spoken of the matter to Mr. S——, who expressed an idea that the disturbances might be caused by his uncle, the late Major S——, who was trying to attract attention in order that prayers might be offered for the repose of his soul. The sounds occurred during full daylight, and in a clear open space between his bed and the ceiling. He did not know to what to compare them, but as he said they were explosive in sound, Lord Bute suggested that they might be compared to the sounds made by petards, which are commonly used in Italy for firing feux de joie. Father H—— answered, "Yes perhaps, if they were continuous enough." He said that the sound which alarmed him more than any other was as of a large animal throwing itself violently against the bottom of his door, outside. A third noise which he had heard was of ordinary raps, of the kind called "spirit-raps." He mentioned a fourth sound, the nature of which Lord Bute does not remember with the same certainty as the others, but believes it was a shriek or scream. Such a sound is described by other witnesses during the subsequent occupation of the house by the H—— family. The fact that the sounds appear to have been inaudible to every one except Father H—— is a strong argument in favour of their subjective, or hallucinatory, character. It will be found that this was very often the case with the peculiar sounds recorded at B——, and even when they were heard by several persons at the same time, there does not appear to be any ground for refusing to recognise them as collective hallucinations....