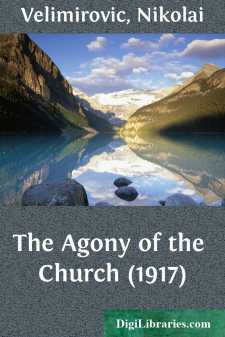 If the official churches have had no other merit but that they have preserved Christ as the treasury of the world, yet they are justified thereby. Even if they have solely repeated through all the past centuries "Lord! Lord!" still they stand above the secular world. For they know at least who the Lord is, whereas the world does not know.

Churches may disappear, but The Church never will. For not churches are the work of Christ, but the Church. Moreover, if the Church disappears, as an institution, the essence of the Church cannot disappear. It is like rivers, sea and water: when rivers disappear into the sea, the sea remains, and if the sea disappears into steam, water still remains.

If Christ ever meant to form the Church as an institution He meant to form it not as the end but as the means, like a boat to bring its inmates safely over the stormy ocean of life into the quiet harbour of His Kingdom.

Like the body in a bath, so the soul disrobes in the Church to wash. But as soon as we get out, we clothe our soul in order to conceal it from the curious eye. Is it not illogical that we dare to show our imperfections to the Most Perfect, while we are ashamed to show them to those who are just as imperfect, ugly and unclean as ourselves? The Church, like a bath, reveals most uncleanness.

The initial and most obvious idea of the Church is collectiveness of sin and salvation. To pray alone and for one's self is like eating alone without regard to other people's hunger.

When the sun sees a man of science, wealth or politics, kneeling at prayer with the poor and humble, it goes smiling to its rest.

Full of beauty and wonders are all the Christian churches, but not because of their pretended perfections: they are beautiful and wonderful because of Him whose shadow they are.

You are a Christian? Then do not be afraid to enter any Christian church with prayerful respect. All the Churches have sworn allegiance to the same Sovereign. How can you respect a cottage, in which once abided His Majesty King Alfred, or Charles, while you would not go into a building dedicated to His Majesty the Invisible King of kings?

Taking the above standard, we find that all the Christian communities are almost quite valueless as to the spirit, i.e. as to their unusual loving care. Their actual value is more physical than spiritual, being as they are limited to the care for themselves. Exceptions are as refreshing as an oasis in the desert.

Church and State are like fire and water. How to connect them? For if connected, fire always dies down under water.