The Age of Shakespeare 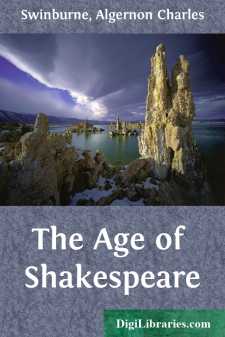 The first great English poet was the father of English tragedy and the creator of English blank verse. Chaucer and Spenser were great writers and great men: they shared between them every gift which goes to the making of a poet except the one which alone can make a poet, in the proper sense of the word, great. Neither pathos nor humor nor fancy nor invention will suffice for that: no poet is great as a poet whom no one could ever pretend to recognize as sublime. Sublimity is the test of imagination as distinguished from invention or from fancy: and the first English poet whose powers can be called sublime was Christopher Marlowe.

The majestic and exquisite excellence of various lines and passages in Marlowe's first play must be admitted to relieve, if it cannot be allowed to redeem, the stormy monotony of Titanic truculence which blusters like a simoom through the noisy course of its ten fierce acts. With many and heavy faults, there is something of genuine greatness in "Tamburlaine the Great"; and for two grave reasons it must always be remembered with distinction and mentioned with honor. It is the first poem ever written in English blank verse, as distinguished from mere rhymeless decasyllabics; and it contains one of the noblest passages—perhaps, indeed, the noblest in the literature of the world—ever written by one of the greatest masters of poetry in loving praise of the glorious delights and sublime submission to the everlasting limits of his art. In its highest and most distinctive qualities, in unfaltering and infallible command of the right note of music and the proper tone of color for the finest touches of poetic execution, no poet of the most elaborate modern school, working at ease upon every consummate resource of luxurious learning and leisurely refinement, has ever excelled the best and most representative work of a man who had literally no models before him, and probably or evidently was often, if not always, compelled to write against time for his living.

The just and generous judgment passed by Goethe on the "Faustus" of his English predecessor in tragic treatment of the same subject is somewhat more than sufficient to counterbalance the slighting or the sneering references to that magnificent poem which might have been expected from the ignorance of Byron or the incompetence of Hallam. And the particular note of merit observed, the special point of the praise conferred, by the great German poet should be no less sufficient to dispose of the vulgar misconception yet lingering among sciolists and pretenders to criticism, which regards a writer than whom no man was ever born with a finer or a stronger instinct for perfection of excellence in execution as a mere noble savage of letters, a rough self-taught sketcher or scribbler of crude and rude genius, whose unhewn blocks of verse had in them some veins of rare enough metal to be quarried and polished by Shakespeare. What most impressed the author of "Faust" in the work of Marlowe was a quality the want of which in the author of "Manfred" is proof enough to consign his best work to the second or third class at most....