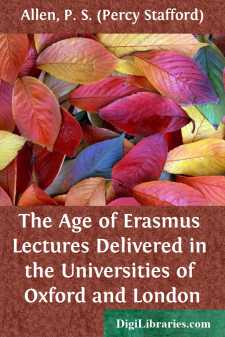 The importance of biography for the study of history can hardly be overrated. In a sense it is true that history should be like the law and 'care not about very small things'; concerning itself not so much with individual personality as with fundamental causes affecting the rise and fall of nations or the development of mental outlook from one age to another. But even if this be conceded, we still must not forget that the course of history is worked out by individuals, who, in spite of the accidental condensation that the needs of human life thrust upon them, are isolated at the last and alone—for no man may deliver his brother. In consequence, it is only in periods when the stream of personal record flows wide and deep that history begins to live, and that we have a chance to view it through the eyes of the actors instead of projecting upon it our own fancies and conceptions.

One of the features that makes the study of the Renaissance so fascinating is that in that age the stream of personal record, which had been driven underground, its course choked and hidden beneath the fallen masonry of the Roman Empire, emerges again unimpeded and flows in ever-increasing volume. For reconstruction of the past we are no longer limited to charters and institutions, or the mighty works of men's hands. In place of a mental output, rigidly confined within unbending modes of thought and expression, we have a literature that reflects the varied phases of human life, that can discard romance and look upon the commonplace; and instead of dry and meagre chronicles, rarely producing evidence at first hand, we have rich store of memoirs and private letters, by means of which we can form real pictures of individuals—approaching almost to personal acquaintance and intimacy—and regard the same events from many points of view, to perception of the circumstances that 'alter cases'.

The period of the Transalpine Renaissance corresponds roughly with the life of Erasmus (1466-1536); from the days when Northern scholars began to win fame for themselves in reborn Italy, until the width of the humanistic outlook was narrowed and the progress of the reawakened studies overwhelmed by the tornado of the Reformation. The aim of these lectures is not so much to draw the outlines of the Renaissance in the North as to present sketches of the world through which Erasmus passed, and to view it as it appeared to him and to some of his contemporaries, famous or obscure. And firstly of the generation that preceded him in the wide but undefined region known then as Germany.

The Cistercian Abbey of Adwert near Groningen, under the enlightened governance of Henry of Rees (1449-85), was a centre to which were attracted most of the scholars whose names are famous in the history of Northern humanism in the second half of the fifteenth century: Wessel, Agricola, Hegius, Langen, Vrye, and others. They came on return from visits to Italy or the universities; men of affairs after discharge of their missions; schoolmasters to rest on their holidays; parish priests in quest of change: all found a welcome from the hospitable Abbot, and their talk ranged far and wide, over the pursuit of learning, till Adwert merited the name of an 'Academy'.

Earliest of these is John Wessel (Гўв‚¬  1489), and perhaps also the most notable; certainly the others looked up to him with a veneration which seems to transcend the natural pre-eminence of seniority. Unfortunately the details of his life have not been fully established. Thirty years after his death, when it was too late for him to define his own views, the Reformers claimed him for their own; and in consequence his body has been wrangled over with the heat which seeks not truth but victory. His father, Hermann Wessel, was a baker from the Westphalian village of Gansfort or Goesevort, who settled in Groningen. After some years in the town school, the boy was about to be apprenticed to a trade, as his parents were too poor to help him further; but the good Oda Jargis, hearing how well he had done at his books, sent him to the school at Zwolle, in which the Brethren of the Common Life took part. There, as at Groningen, he rose to the top, and in his last years, as a first-form boy, also did some teaching in the third form, according to the custom of the school....