The African Trader The Adventures of Harry Bayford 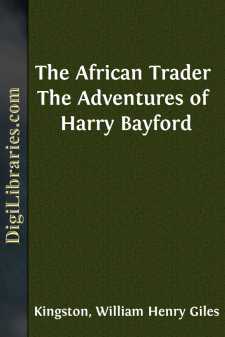 My father, after meeting with a severe reverse of fortune, dies, and my sisters and I are left destitute.—Our faithful old black nurse Mammy, takes care of my sisters, while I, invited by a former acquaintance, Captain Willis of the “Chieftain,” sail with him on a trading voyage to the coast of Africa.

Our school was breaking up for the midsummer holidays—north, south, east, and west we sped to our different destinations, thinking with glee of the pleasures we believed to be in store for us.

I was bound for Liverpool, where my father, a West India merchant, now resided. He had for most of his life lived in Jamaica, where I was born, and from whence I had a few years before accompanied him to England to go to school.

“I am sorry we shall not see you back, Bayford,” said the good doctor, as he shook me warmly by the hand. “May our heavenly Father protect you, my boy, wherever you go.”

“I hope to go as a midshipman on board a man-of-war, sir,” I answered. “My father expects to get me appointed to a ship this summer, and I suppose that is the reason I am leaving.”

The doctor looked kindly and somewhat sadly at me. “You must not, Harry, raise your hopes on that point too high,” he answered, in a grave tone. “When I last heard from your father, saying he desired to remove you, he was very unwell. I grieve to have to say this, but it is better that you should be prepared for evil tidings. God bless you Harry Bayford. The coach will soon be up; I must not detain you longer.”

I hastened after Peter the porter, who was wheeling my trunk down to the village inn where the coach stopped, and I had just time to mount on the top when the guard cried out, “All right;” the coachman laid his whip along the backs of the horses, which trotted gaily forward along the dusty road.

My spirits would naturally have risen at finding myself whirled along at the rate of ten miles an hour on my way homeward, but the last words spoken by the doctor continually recurred to me, and contributed greatly to damp them. I managed, however, at length, to persuade myself that my anticipations of evil were mere fancies. On reaching Liverpool, having called a porter to carry my things, I hurried homewards, expecting to receive the usual happy greetings from my father and sisters. My spirits sank when looking up at the windows, I saw that all the blinds were drawn down. I knocked at the door with trembling hand. A strange and rough-looking man opened it. “Is my father at home?” I asked, in a low voice. The man hesitated, looking hard at me, and then said, “Yes; but you can’t see him. There are some ladies upstairs—your sisters, I suppose—you had better go to them.”

There was an ominous silence in the house; no one was moving about. What had become of all the servants? I stole gently up to Jane and Mary’s boudoir. They, and little Emily our younger sister, were seated together, all dressed in black. Sobs burst from them, as they threw their arms round my neck, without uttering a word. I then knew to a certainty what had happened—our kind father was dead; but I little conceived the sad misfortunes which had previously overtaken him and broken his heart, leaving his children utterly destitute.

Jane, on recovering herself, in a gentle sad voice told me all about it....