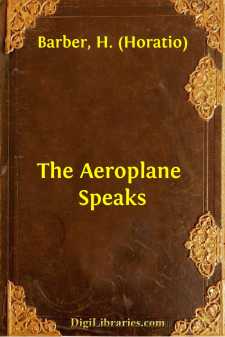 PART I. THE ELEMENTARY PRINCIPLES AIR THEIR GRIEVANCES

The Lecture Hall at the Royal Flying Corps School for Officers was deserted. The pupils had dispersed, and the Officer Instructor, more fagged than any pupil, was out on the aerodrome watching the test of a new machine.

Deserted, did I say? But not so. The lecture that day had been upon the Elementary Principles of Flight, and they lingered yet. Upon the Blackboard was the illustration you see in the frontispiece.

"I am the side view of a Surface," it said, mimicking the tones of the lecturer. "Flight is secured by driving me through the air at an angle inclined to the direction of motion."

"Quite right," said the Angle. "That's me, and I'm the famous Angle of Incidence."

"And," continued the Surface, "my action is to deflect the air downwards, and also, by fleeing from the air behind, to create a semi-vacuum or rarefied area over most of the top of my surface."

"This is where I come in," a thick, gruff voice was heard, and went on: "I'm the Reaction. You can't have action without me. I'm a very considerable force, and my direction is at right-angles to you," and he looked heavily at the Surface. "Like this," said he, picking up the chalk with his Lift, and drifting to the Blackboard.

"I act in the direction of the arrow R, that is, more or less, for the direction varies somewhat with the Angle of Incidence and the curvature of the Surface; and, strange but true, I'm stronger on the top of the Surface than at the bottom of it. The Wind Tunnel has proved that by exhaustive research—and don't forget how quickly I can grow! As the speed through the air increases my strength increases more rapidly than you might think—approximately, as the Square of the Speed; so you see that if the Speed of the Surface through the air is, for instance, doubled, then I am a good deal more than doubled. That's because I am the result of not only the mass of air displaced, but also the result of the Speed with which the Surface engages the Air. I am a product of those two factors, and at the speeds at which Aeroplanes fly to-day, and at the altitudes and consequent density of air they at present experience, I increase at about the Square of the Speed.

"Oh, I'm a most complex and interesting personality, I assure you—in fact, a dual personality, a sort of aeronautical Dr. Jekyll and Mr. Hyde. There's Lift, my vertical part or COMPONENT, as those who prefer long words would say; he always acts vertically upwards, and hates Gravity like poison. He's the useful and admirable part of me. Then there's Drift, my horizontal component, sometimes, though rather erroneously, called Head Resistance; he's a villain of the deepest dye, and must be overcome before flight can be secured."

"And I," said the Propeller, "I screw through the air and produce the Thrust. I thrust the Aeroplane through the air and overcome the Drift; and the Lift increases with the Speed and when it equals the Gravity of Weight, then—there you are—Flight! And nothing mysterious about it at all."

"I hope you'll excuse me interrupting," said a very beautiful young lady, "my name is Efficiency, and, while no doubt, all you have said is quite true, and that, as my young man the Designer says, `You can make a tea-tray fly if you slap on Power enough,' I can assure you that I'm not to be won quite so easily."

"Well," eagerly replied the Lift and the Thrust, "let's be friends....