The Adventures of Unc' Billy Possum 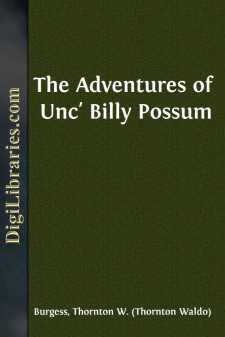 THE Green Meadows were thrown into great excitement late one afternoon, just as the black shadows came creeping down from the Purple Hills. Reddy Fox brought the news, and when he told it he grinned as if he enjoyed it and was glad of it.

"Old Billy Possum is dead. I know it because I saw Farmer Brown's boy carrying him home by the tail," said Reddy. "So you see he wasn't so smart as you thought he was," he added maliciously.

No one really believed Reddy Fox, for every one knows that he seldom tells the truth, but when Jimmy Skunk came mournfully down the Crooked Little Path and said that it was true, they had to believe it. Then everybody began to talk about Unc' Billy and say nice things about him and tell how much they had enjoyed having him live in the Green Forest since he came up from "Ol' Virginny." That is, everybody but Reddy Fox said so. Reddy said that it served Unc' Billy right, because he was of no account, anyway. Then everybody began to hoot and hiss at Reddy until he was glad enough to slink away.

And while they were all saying such nice things about him, Unc' Billy Possum was having an exciting adventure. For once he had been too bold. He had gone up to Farmer Brown's hen-house before dark. Jimmy Skunk had tried to stop him, but he had heeded Jimmy Skunk not at all. He had said that he was hungry and wanted an egg, and he couldn't wait till dark to get it. So off he had started, for Unc' Billy Possum is very headstrong and obstinate.

He had reached the hen-house and slipped inside without being seen. The nests were full of eggs, and soon Unc' Billy was enjoying his feast so that he forgot to keep watch. Suddenly the door opened, and in stepped Farmer Brown's boy to get some eggs for supper. There was no time to run. Unc' Billy just dropped right down in his tracks as if he were dead.

When Farmer Brown's boy saw him, he didn't know what to make of him, for he had never seen Unc' Billy before.

"Well, well, I wonder what happened to this fellow," said Farmer Brown's boy, turning Unc' Billy over with the toe of one foot. "He certainly is dead enough, whatever killed him. I wonder what he was doing in here."

Then he saw some egg on Unc' Billy's lips. "Ho! ho!" shouted Farmer Brown's boy. "So you are the thief who has been getting my eggs!" And picking up Unc' Billy by the tail, he started with him for the house.

As they passed the woodpile, he tossed Unc' Billy on the chopping-block while he gathered an armful of kindlings to take to the house. When he turned to pick up Unc' Billy again, Unc' Billy wasn't there.

Farmer Brown's boy dropped his wood and hunted everywhere, but not a trace of Unc' Billy could he find.

REDDY FOX came down the Lone Little Path through the Green Forest on his way to the Green Meadows. He had brushed his red coat until it shone. His white waistcoat was spotless, and he carried his big tail high in the air, that it might not become soiled. Reddy was feeling as fine as he looked....