The Adventures of Prickly Porky 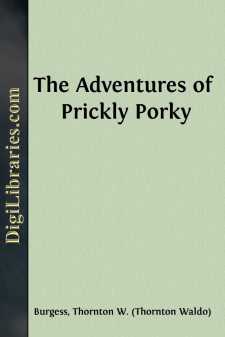 HAPPY JACK SQUIRREL had had a wonderful day. He had found some big chestnut-trees that he had never seen before, and which promised to give him all the nuts he would want for all the next winter. Now he was thinking of going home, for it was getting late in the afternoon. He looked out across the open field where Mr. Goshawk had nearly caught him that morning. His home was on the other side.

"It's a long way 'round," said Happy Jack to himself, "but it is best to be safe and sure."

So Happy Jack started on his long journey around the open field. Now, Happy Jack's eyes are bright, and there is very little that Happy Jack does not see. So, as he was jumping from one tree to another, he spied something down on the ground which excited his curiosity.

"I must stop and see what that is," said Happy Jack. So down the tree he ran, and in a few minutes he had found the queer thing, which had caught his eyes. It was smooth and black and white, and at one end it was very sharp with a tiny little barb. Happy Jack found it out by pricking himself with it.

"Ooch," he cried, and dropped the queer thing. Pretty soon he noticed there were a lot more on the ground.

"I wonder what they are," said Happy Jack. "They don't grow, for they haven't any roots. They are not thorns, for there is no plant from which they could come. They are not alive, so what can they be?"

Now, Happy Jack's eyes are bright, but sometimes he doesn't use them to the very best advantage. He was so busy examining the queer things on the ground that he never once thought to look up in the tops of the trees. If he had, perhaps he would not have been so much puzzled. As it was he just gathered up three or four of the queer things and started on again. On the way he met Peter Rabbit and showed Peter what he had. Now, you know Peter Rabbit is very curious. He just couldn't sit still, but must scamper over to the place Happy Jack Squirrel told him about.

But as usual, Peter was in too much of a hurry to heed what was said to him. Lipperty-lipperty-lip, lipperty-lipperty-lip, went Peter Rabbit through the woods, as fast as his long legs would take him. Then suddenly he squealed and sat down to nurse one of his feet. But he was up again in a flash with another squeal louder than before. Peter Rabbit had found the queer things that Happy Jack Squirrel had told him about. One was sticking in his foot, and one was in the white patch on the seat of his trousers.

II THE STRANGER FROM THE NORTH

THE Merry Little Breezes of Old Mother West Wind were excited. Yes, Sir, they certainly were excited. They had met Happy Jack Squirrel and Peter Rabbit, and they were full of the news of the queer things that Happy Jack and Peter Rabbit had found over in the Green Forest. They hurried this way and that way over the Green Meadows and told every one they met. Finally they reached the Smiling Pool and excitedly told Grandfather Frog all about it.

"Pooh," said Grandfather Frog. "I know what they are."

"What?" cried all the Merry Little Breezes together. "Happy Jack says he is sure they do not grow, for there are no strange plants over there."

Grandfather Frog opened his big mouth and snapped up a foolish green fly that one of the Merry Little Breezes blew over to him....