The Adventures of Paddy Beaver 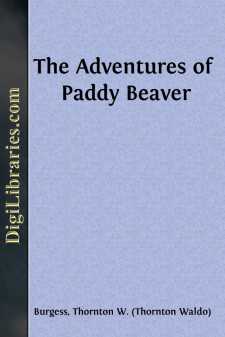 HIS little rhyme Paddy the Beaver made up as he toiled at building the dam which was to make the pond he so much desired deep in the Green Forest. Of course it wasn't quite true, that about working all night and all day. Nobody could do that, you know, and keep it up. Everybody has to rest and sleep. Yes, and everybody has to play a little to be at their best. So it wasn't quite true that Paddy worked all day after working all night. But it was true that Paddy had no time to play. He had too much to do. He had had his playtime during the long summer, and now he had to get ready for the long cold winter.

Now of all the little workers in the Green Forest, on the Green Meadows, and in the Smiling Pool, none can compare with Paddy the Beaver, not even his cousin, Jerry Muskrat. Happy Jack Squirrel and Striped Chipmunk store up food for the long cold months when rough Brother North Wind and Jack Frost rule, and Jerry Muskrat builds a fine house wherein to keep warm and comfortable, but all this is as nothing to the work of Paddy the Beaver.

As I said before, Paddy had had a long playtime through the summer. He had wandered up and down the Laughing Brook. He had followed it way up to the place where it started. And all the time he had been studying and studying to make sure that he wanted to stay in the Green Forest. In the first place, he had to be sure that there was plenty of the kind of food that he likes. Then he had to be equally sure that he could make a pond near where this particular food grew. Last of all, he had to satisfy himself that if he did make a pond and build a home, he would be reasonably safe in it. And all these things he had done in his playtime. Now he was ready to go to work, and when Paddy begins work, he sticks to it until it is finished. He says that is the only way to succeed, and you know and I know that he is right.

Now Paddy the Beaver can see at night just as Reddy Fox and Peter Rabbit and Bobby Coon can, and he likes the night best, because he feels safest then. But he can see in the daytime too, and when he feels that he is perfectly safe and no one is watching, he works then too. Of course the first thing to do was to build a dam across the Laughing Brook to make the pond he so much needed. He chose a low open place deep in the Green Forest, around the edge of which grew many young aspen-trees, the bark of which is his favorite food. Through the middle of this open place flowed the Laughing Brook. At the lower edge was just the place for a dam. It would not have to be very long, and when it was finished and the water was stopped in the Laughing Brook, it would just have to flow over the low open place and make a pond there. Paddy's eyes twinkled when he first saw it. It was right then that he made up his mind to stay in the Green Forest.

So now that he was ready to begin his dam he went up the Laughing Brook to a place where alders and willows grew, and there he began work; that work was the cutting of a great number of trees by means of his big front teeth which were given him for just this purpose....