The Adventures of Lightfoot the Deer 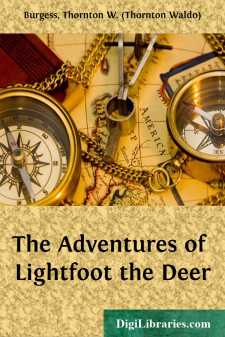 Peter Rabbit was on his way back from the pond of Paddy the Beaver deep in the Green Forest. He had just seen Mr. and Mrs. Quack start toward the Big River for a brief visit before leaving on their long, difficult journey to the far-away Southland. Farewells are always rather sad, and this particular farewell had left Peter with a lump in his throat,—a queer, choky feeling.

"If I were sure that they would return next spring, it wouldn't be so bad," he muttered. "It's those terrible guns. I know what it is to have to watch out for them. Farmer Brown's boy used to hunt me with one of them, but he doesn't any more. But even when he did hunt me it wasn't anything like what the Ducks have to go through. If I kept my eyes and ears open, I could tell when a hunter was coming and could hide in a hole if I wanted to. I never had to worry about my meals. But with the Ducks it is a thousand times worse. They've got to eat while making that long journey, and they can eat only where there is the right kind of food. Hunters with terrible guns know where those places are and hide there until the Ducks come, and the Ducks have no way of knowing whether the hunters are waiting for them or not. That isn't hunting. It's—it's—"

"Well, what is it? What are you talking to yourself about, Peter Rabbit?"

Peter looked up with a start to find the soft, beautiful eyes of Lightfoot the Deer gazing down at him over the top of a little hemlock tree.

"It's awful," declared Peter. "It's worse than unfair. It doesn't give them any chance at all."

"I suppose it must be so if you say so," replied Lightfoot, "but you might tell me what all this awfulness is about."

Peter grinned. Then he began at the beginning and told Lightfoot all about Mr. and Mrs. Quack and the many dangers they must face on their long journey to the far-away Southland and back again in the spring, all because of the heartless hunters with terrible guns. Lightfoot listened and his great soft eyes were filled with pity for the Quack family.

"I hope they will get through all right," said he, "and I hope they will get back in the spring. It is bad enough to be hunted by men at one time of the year, as no one knows better than I do, but to be hunted in the spring as well as in the fall is more than twice as bad. Men are strange creatures. I do not understand them at all. None of the people of the Green Forest would think of doing such terrible things. I suppose it is quite right to hunt others in order to get enough to eat, though I am thankful to say that I never have had to do that, but to hunt others just for the fun of hunting is something I cannot understand at all. And yet that is what men seem to do it for. I guess the trouble is they never have been hunted themselves and don't know how it feels. Sometimes I think I'll hunt one some day just to teach him a lesson. What are you laughing at, Peter?"

"At the idea of you hunting a man," replied Peter. "Your heart is all right, Lightfoot, but you are too timid and gentle to frighten any one. Big as you are I wouldn't fear you."

With a single swift bound Lightfoot sprang out in front of Peter. He stamped his sharp hoofs, lowered his handsome head until the sharp points of his antlers, which people call horns, pointed straight at Peter, lifted the hair along the back of his neck, and made a motion as if to plunge at him. His eyes, which Peter had always thought so soft and gentle, seemed to flash fire.

"Oh!" cried Peter in a faint, frightened-sounding voice and leaped to one side before it entered his foolish little head that Lightfoot was just pretending....