The Adventures of Jimmy Skunk 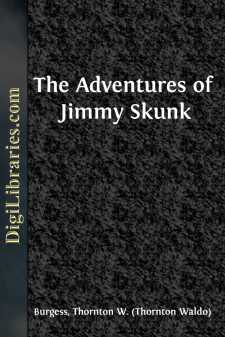 PETER RABBIT PLANS A JOKE The Imp of Mischief, woe is me,Is always busy as a bee.

That is why so many people are forever getting into trouble. He won't keep still. No, Sir, he won't keep still unless he is made to. Once let him get started there is no knowing where he will stop. Peter Rabbit had just seen Jimmy Skunk disappear inside an old barrel, lying on its side at the top of the hill, and at once the Imp of Mischief began to whisper to Peter. Of course Peter shouldn't have listened. Certainly not. But he did. You know Peter dearly loves a joke when it is on some one else. He sat right where he was and watched to see if Jimmy would come out of the barrel. Jimmy didn't come out, and after a little Peter stole over to the barrel and peeped inside. There was Jimmy Skunk curled up for a nap.

Peter tiptoed away very softly. All the time the Imp of Mischief was whispering to him that this was a splendid chance to play a joke on Jimmy. You know it is very easy to play a joke on any one who is asleep. Peter doesn't often have a chance to play a joke on Jimmy Skunk. It isn't a very safe thing to do, not if Jimmy is awake. No one knows that better than Peter. He sat down some distance from the barrel but where he could keep an eye on it. Then he went into a brown study, which is one way of saying that he thought very hard. He wanted to play a joke on Jimmy, but like most jokers he didn't want the joke to come back on himself. In fact, he felt that it would be a great deal better for him if Jimmy shouldn't know that he had anything to do with the joke.

As he sat there in a brown study, he happened to glance over on the Green Meadows and there he saw something red. He looked very hard, and in a minute he saw that it was Reddy Fox. Right away, Peter's nimble wits began to plan how he could use Reddy Fox to play a joke on Jimmy. All in a flash an idea came to him, an idea that made him laugh right out. You see, the Imp of Mischief was very, very busy whispering to Peter.

"If Reddy were only up here, I believe I could do it, and it would be a joke on Reddy as well as on Jimmy," thought Peter, and laughed right out again.

"What are you laughing at?" asked a voice. It was the voice of Sammy Jay.

Right away a plan for getting Reddy up there flashed into Peter's head. He would get Sammy angry, and that would make Sammy scream. Reddy would be sure to come up there to see what Sammy Jay was making such a fuss about. Sammy, you know, is very quick-tempered. No one knows this better than Peter. So instead of replying politely to Sammy, as he should have done, Peter spoke crossly:

"Fly away, Sammy, fly away! It is no business of yours what I am laughing at," said he.

Right away Sammy's quick temper flared up. He began to call Peter names, and Peter answered back. This angered Sammy still more, and as he always screams when he is angry, he was soon making such a racket that Reddy Fox down on the Green Meadows couldn't help but hear it. Peter saw him lift his head to listen. In a few minutes he began to trot that way....