The Adventures of Jerry Muskrat 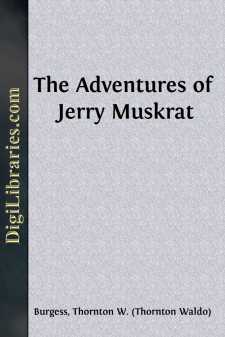 CHAPTER I: Jerry Muskrat Has A Fright

What was it Mother Muskrat had said about Farmer Brown's boy and his traps? Jerry Muskrat sat on the edge of the Big Rock and kicked his heels while he tried to remember. The fact is, Jerry had not half heeded. He had been thinking of other things. Besides, it seemed to him that Mother Muskrat was altogether foolish about a great many things.

"Pooh!" said Jerry, throwing out his chest, "I guess I can take care of myself without being tied to my mother's apron strings! What if Farmer Brown's boy is setting traps around the Smiling Pool? I guess he can't fool your Uncle Jerry. He isn't so smart as he thinks he is; I can fool him any day." Jerry chuckled. He was thinking of how he had once fooled Farmer Brown's boy into thinking a big trout was on his hook.

Slowly Jerry slid into the Smiling Pool and swam over towards his favorite log. Peter Rabbit stuck his head over the edge of the bank. "Hi, Jerry," he shouted, "last night I saw Farmer Brown's boy coming over this way with a lot of traps. Better watch out!"

"Go chase yourself, Peter Rabbit. I guess I can look out for myself," replied Jerry, just a little crossly.

Peter made a wry face and started for the sweet clover patch. Hardly was he out of sight when Billy Mink and Bobby Coon came down the Laughing Brook together. They seemed very much excited. When they saw Jerry Muskrat, they beckoned for him to come over where they were, and when he got there, they both talked at once, and it was all about Farmer Brown's boy and his traps.

"You'd better watch out, Jerry," warned Billy Mink, who is a great traveler and has had wide experience.

"Oh, I guess I'm able to take care of myself," said Jerry airily, and once more started for his favorite log. And what do you suppose he was thinking about as he swam along? He was wishing that he knew what a trap looked like, for despite his boasting he didn't even know what he was to look out for. As he drew near his favorite log, something tickled his nose. He stopped swimming to sniff and sniff. My, how good it did smell! And it seemed to come right straight from the old log. Jerry began to swim as fast as he could. In a few minutes he scrambled out on the old log. Then Jerry rubbed his eyes three times to be sure that he saw aright. There were luscious pieces of carrot lying right in front of him.

Now there is nothing that Jerry Muskrat likes better than carrot. So he didn't stop to wonder how it got there. He just reached out for the nearest piece and ate it. Then he reached for the next piece and ate it. Then he did a funny little dance just for joy. When he was quite out of breath, he sat down to rest. Snap! Something had Jerry Muskrat by the tail! Jerry squealed with fright and pain. Oh, how it did hurt! He twisted and turned, but he was held fast and could not see what had him. Then he pulled and pulled, until it seemed as if his tail would pull off. But it didn't. So he kept pulling, and pretty soon the thing let go so suddenly that Jerry tumbled head first into the water....