The Adventures of Grandfather Frog 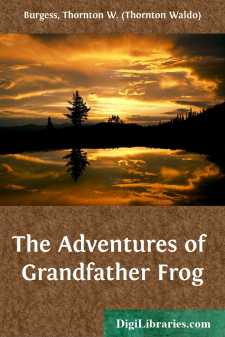 Billy Mink ran around the edge of the Smiling Pool and turned down by the Laughing Brook. His eyes twinkled with mischief, and he hurried as only Billy can. As he passed Jerry Muskrat's house, Jerry saw him.

"Hi, Billy Mink! Where are you going in such a hurry this fine morning?" he called.

"To find Little Joe Otter. Have you seen anything of him?" replied Billy.

"No," said Jerry. "He's probably down to the Big River fishing. I heard him say last night that he was going."

"Thanks," said Billy Mink, and without waiting to say more he was off like a little brown flash.

Jerry watched him out of sight. "Hump!" exclaimed Jerry. "Billy Mink is in a terrible hurry this morning. Now I wonder what he is so anxious to find Little Joe Otter for. When they get their heads together, it is usually for some mischief."

Jerry climbed to the top of his house and looked over the Smiling Pool in the direction from which Billy Mink had just come. Almost at once he saw Grandfather Frog fast asleep on his big green lily-pad. The legs of a foolish green fly were sticking out of one corner of his big mouth. Jerry couldn't help laughing, for Grandfather Frog certainly did look funny.

"He's had a good breakfast this morning, and his full stomach has made him sleepy," thought Jerry. "But he's getting careless in his old age. He certainly is getting careless. The idea of going to sleep right out in plain sight like that!"

Suddenly a new thought popped into his head. "Billy Mink saw him, and that is why he is so anxious to find Little Joe Otter. He is planning to play some trick on Grandfather Frog as sure as pollywogs have tails!" exclaimed Jerry. Then his eyes began to twinkle as he added: "I think I'll have some fun myself."

Without another word Jerry slipped down into the water and swam over to the big green lily-pad of Grandfather Frog. Then he hit the water a smart blow with his tail. Grandfather Frog's big goggly eyes flew open, and he was just about to make a frightened plunge into the Smiling Pool when he saw Jerry.

"Have a nice nap?" inquired Jerry, with a broad grin.

"Don't you think it a rather dangerous plan to think so long with your eyes closed?" asked Jerry.

"Maybe you did," replied Jerry. "Now listen." Then Jerry whispered in Grandfather Frog's ear, and both chuckled as if they were enjoying some joke, for they are great friends, you know. Afterward Jerry swam back to his house, and Grandfather Frog closed his eyes so as to look just as he did when he was asleep.

Meanwhile Billy Mink had hurried down the Laughing Brook. Half-way to the Big River he met Little Joe Otter bringing home a big fish, for you know Little Joe is a great fisherman. Billy Mink hastened to tell him how Grandfather Frog had fallen fast asleep on his big green lily-pad.

"It's a splendid chance to have some fun with Grandfather Frog and give him a great scare," concluded Billy....